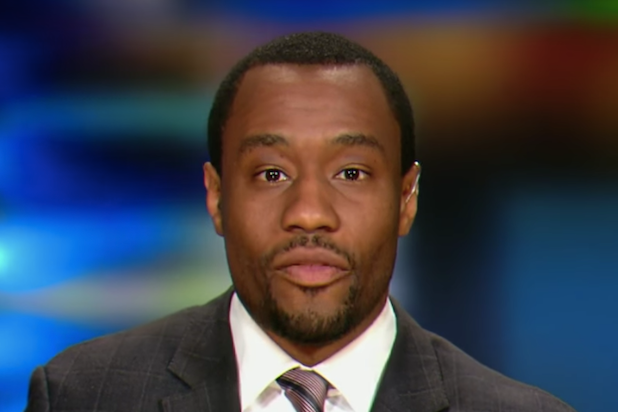 Louis Farrakhan is using a photo with CNN contributor Marc Lamont Hill to promote a $260 box set of music on his Nation of Islam website, TheWrap has learned.

Hill, a political commentator for CNN touted on the site as “one of the leading intellectual voices in the country,” told TheWrap that he was not aware his image was being used for commercial purposes and will ask for its removal.

“I don’t want to be used to promote anybody’s materials,” he said. “I am going to ask for it to be taken down as I don’t think it’s consistent with my values and my professional standards.”

Hill said the photo was taken sometime in the autumn of 2016 after the minister invited a number of people to a Wyoming farm to listen to the new album. “It wasn’t like one big event it was just people, cycling in and out,” he said. “It was good music actually.”

Reps for CNN declined to comment; a rep for Farrakhan’s Ministers Music Inc. did not immediately respond to a request for comment.

The Nation of Islam leader has faced heat in recent days for remarks comparing Jews to “termites” during a speech earlier this month — prompting a campaign for social media companies to ban Farrakhan outright from their platforms. While Twitter has said the minister’s comments about Jews and termites did not violate its rules, Facebook took action late Thursday evening, deleting the post and calling it hate speech.

Hill said he completely condemned Farrakhan’s remarks but that he did not regret the 2016 meeting. “I worked on Fox News for years, having conversations with people I disagree with, people who said and did things I thought were racist, sexist and xenophobic, but I had conversations with them because I thought it was important,” he said.

Hill also said it would be a mistake for social media companies to ban Farrakhan. “I don’t think shutting down the public conversation is the way to do it,” he said. “People should have access to ideas. Even bad ideas.”

It’s not the first time Hill has faced awkward questions about the minister, whom the Southern Poverty Law Center classifies as an “extremist.”

In 2008, Hill defended Farrakhan during an appearance on “Hannity & Colmes.”

“I do not know if he is an anti-Semite,” Hill said after Hannity confronted him with quotes from Farrakhan, including his description of Judaism as a “gutter religion.” Hill said the line was “out of context.”

Like Farrakhan, Hill is also a vocal critic of Israel, and supports the divisive Boycott, Divestment and Sanction campaign to punish the country for what some say is their occupation of Palestinian territory.

In the past, Hill has routinely pushed back against critics who have suggested that his criticism of the Israeli government is rooted in anti-Semitism.