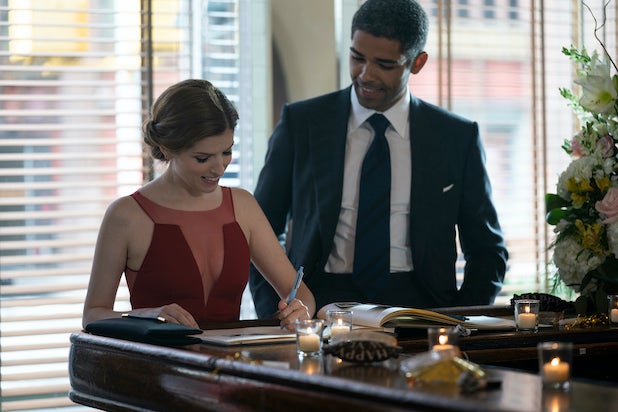 (Warning: This post contains spoilers for “Love Life” through the Season 1 finale.)

The first season of HBO Max’s comedy anthology “Love Life” came to a conclusion Thursday, giving Anna Kendrick’s Darby Carter the happy ending she deserved — but that we may not have expected.

Darby and Augie’s (Jin Ha) revived flame burned out, but not before they conceived a child together and agreed to co-parent their son, a decision that tied the former lovers together in platonic, mature fashion that would have been hard to imagine when their first romance ended abruptly in the series premiere. And yes, “Love Life” creator Sam Boyd and his co-showrunner Bridget Bedard know this might not be what you hoped for when these two once-compatible people fell hard for each other in their early ’20s and were only torn apart by circumstances.

“I really have felt from the beginning that if we had Darby and Augie end up together, it would just be — well then, I don’t know why you’d have to watch the show beyond the pilot,” Boyd told TheWrap. “Part of what was really interesting about the story with Augie was that we have this story of them in the pilot and they’re these two people who kind of connect at this one moment when they’re quite young and fall hard and fast and it’s over quickly and they kind of go off onto these other journeys, these individual journeys that they have. And what we always wanted was this idea that, because Augie gets pulled away for work, Darby is always able to ask herself, what if? So she’s always able to have in her mind this idea of, if he just hadn’t had to leave, that would have been the person.”

He added: “And I think what was really interesting to us instead was not the story of coming back to that person and having it work out, but instead coming back to that person and being different and having them be different and that you were in your early 20s. Just the idea of what it’s like to mean so much to someone early in your life and that they’re your person possibly, and then to grow and to become an adult and to find out that even if you love each other, and even if, in the case of this child that they share, they’re gonna be in each other’s lives forever, that they’re different people and they can be happy and have a good relationship without necessarily being romantically compatible. And we can practically comment on the dream of the pilot a little bit without it being a fairytale ending to that.”

So what about Grant (Kingsley Ben-Adir), the charming British gentleman who waltzes into Darby’s life in the finale and turns out to be her perfect fit? Well, Bedard says that making sure you believe Grant was Darby’s happy ending in half an hour required something you might not have noticed in one of the precious few scenes they had together.

“Grant is so unbelievably charming,” she said. “And hopefully people will catch this, but we did seed in a few ideas there. Like the one night they have together where they are almost matching damage and find out they had both been through something serious in their recently ended relationships. So in a way, they met at the right moment in time for both of their development. So I know it’s only a scene and a couple of lines, but we did try to lay that in there so you’d see these two people would be right for each other going forward.”

Though Boyd, Bedard and executive producer Paul Feig have been working on Season 2 of “Love Life” for a while now, the show was just formally renewed by HBO Max on Thursday — pegged to its final four episodes dropping on the platform. And, as the team had laid out when the show was first ordered to series, it was confirmed that Kendrick’s Darby would not be the lead  of the second installment, which will follow a new character. The challenge of losing Kendrick — in a way, as she is still an executive producer on the show and will is not lost on Boyd and Bedard.

“It is always really hard with an anthology series to start over. And I think — especially with somebody like Anna, who everybody loves and wants to keep watching — that can sometimes pose the question of, where are they gonna go from there?” Boyd said. “But from the inception of this series and the beginning of this idea, what was always exciting to us was the potential to follow different people’s lives and to make the protagonist from season to season as different as possible from each other and to tell a million different stories about what it’s like to be a person and what it’s like to try to connect with other people and looking at love in ways we never have been, and Darby’s story is our way into that.”

In Thursday’s Season 2 renewal announcement HBO Max said, “Season two will remain set in New York City but will focus on a new character’s journey – one which explores what happens when you’ve lived your whole life knowing who your soulmate is, only to find out years into a marriage that it’s not the right fit at all. The new season will also cleverly key off characters in season one, and Darby will appear occasionally.”

“We obviously can’t talk about specifics, but I know that it’s what we’ve been excited about from the beginning, the idea of being able to pick up and follow someone else’s life and make that life feel important, too, and just use this kind of container as a way to tell a story so that we can explore as many different ways as possible to try to love somebody,” Boyd said.

And Bedard reassured us that all of “Love Life” will “remain within the same world.”

“There will be a baton toss of sorts between characters that we know and weaving together between the two seasons while still looking at an entirely new protagonist. “

Boyd added: “We’ll start over every season with a new protagonist, but we’re making a connected universe with these tangential bridges and relationships between our characters and people weave in and out. I think very much the plan is to have each season take place in the same universe where there are fun little Easter eggs and we’re weaving it all together as opposed to a normal anthology show where it’s a totally different each season.”