Love is the best thing in the world, proclaims Murphy (Karl Glusman), a young American filmmaker in Paris. And sex is the second best thing. So having sex with someone you love — what Murphy calls “sentimental sexuality” — well, he’s got no words for how sublime that is. That’s what he wants to portray on screen, he explains — right before he indulges in a bathroom quickie with a stranger while his girlfriend Electra (Aomi Muyock), whom he believes to be his soul mate, stands around one room over.

Depicting “sentimental sexuality” is also, not coincidentally, one of the aims writer-director Gaspar Noé (“Enter the Void,” “Irreversible”) has for “Love,” a sincere but repetitive drone of a picture. The explicit, English-language drama opens with a three-minute scene featuring its central pair, both lanky and hairless as a Brancusi, manually stimulating each other. Murphy visibly orgasms, then does so twice more in later scenes.

In one, he spurts semen in tight close-up toward the audience in 3-D (pay the $2 surcharge if you dare). Neither Electra nor Omi (Klara Kristin), whom Murphy knocks up while cheating on his girlfriend, is ever seen noticeably coming in the film’s 135-minute running time.

There is Murphy’s phallocentrism, and there is the film’s. The former drives “Love,” which tells of the disintegration of the id-powered, drug-drenched, erotically experimental love affair between Murphy and Electra, who meet as college students. In the present day, just a couple of years after Electra’s sudden disappearance, Murphy lives with Omi and their tear-prone toddler. Through extensive flashbacks — edited gorgeously so that many of the cuts between scenes look like mournful blinks — we see how Murphy’s pathological selfishness and wandering eye (and other body parts) rotted his relationship with Electra.

Also Read: U.S. Visa Rules Debunked: How International Stars and Entertainment Professionals Get to Work in the U.S.

“Love” feels deeply, but not complexly. Both Murphy and Noé’s sustained sex scenes understand want and need, but there’s little to invest in emotionally. There’s a gorgeously shot cab ride when they’re fighting in silhouette, their faces almost kissing visually (mirroring the much happier moment visualized above), but their words wounding mortally. Murphy spits that Electra will never be successful as a painter — and that’s the nicest thing he says in that scene. 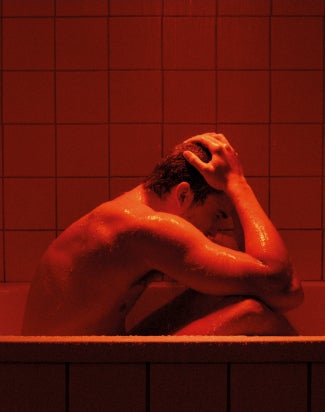 He eventually becomes intolerable to be around as his pain and his lust turn numbing — and then the film goes on for an hour longer, with him weeping, seething, sulking, praying, longing. It might have been nice to learn at some point what he loves so much about Electra.

Shining through the heavy cloud of Murphy’s grief, at least, is the script’s dry sense of humor, with Noé taking a couple of light-hearted swipes at his protagonist’s Ugly Americanism. The amateur actors acquit themselves nicely, and the director himself makes a bewigged cameo as Electra’s inappropriately older ex-lover. There’s a transphobic sequence that would have seemed dated 10 years ago, but otherwise, the film briefly accomplishes what it sets out to do sexually — to turn you on while making you feel for the characters as people — before it exhausts you like every other kind of porn with its mechanical thrust-thrust-thrusting. Noé’s got the sex down, but he needs some more sentiment to make it all worthwhile.