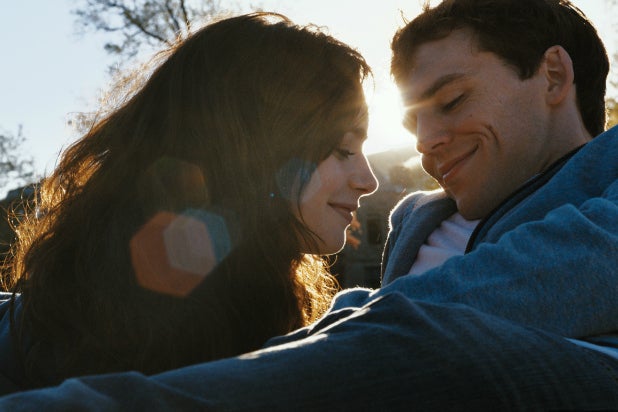 A Styrofoam heart and an embarrassingly juvenile worldview guide “Love, Rosie,” is the latest pit stop for rising stars Lily Collins and Sam Claflin. A misguided attempt to spin a nightmare scenario into a cutesy rom-com premise, this British production takes place in a harrowingly claustrophobic world where personal growth ends at age 18, and you meet everyone you’ll ever become friends with in your whole life during high school.

Collins and Claflin play Rosie and Alex, childhood best friends who share a drunken kiss as teenagers and spend their 20s pining for each other across the Atlantic as they cycle through doomed romances and, in Rosie’s case, young motherhood.

Directed by German director Christian Ditter in his English-language debut, “Love, Rosie” contains just one scene of believable emotion, when Rosie hugs Alex goodbye at the airport just before his trans-Atlantic flight to Harvard. Their bodies are crushed together, but a gaping inch separates their faces. Rosie is desperate to kiss him, but too afraid to lean forward; Alex is just as desperate for her to refrain, though a small part of him wants it, too. Their short, long embrace is a masterclass in quiver-acting.

Rosie and Alex’s puppy love ages poorly, in large part because the film doesn’t let its protagonist grow up. Based on a novel by Cecelia Ahern that was published when its author was just 23, “Love, Rosie” is about fulfilling every fantasy that its main character thought up as a wistful and naïve adolescent, even after her life is upended by a teen pregnancy, rather than about discovering new priorities and goals as she matures.

Hence, Rosie’s 12-year infatuation with her high school crush, who now lives 3,000 miles away, comes across as increasingly pathetic — a possibility Juliette Towhidi’s script never considers. Even as a busy single mother, nearly every one of Rosie’s conversations with her best friend Ruby (Jaime Winstone) still revolves around Alex. (I hereby propose a new gal pal rule: Friends don’t let friends nurse decades-long obsessions with men they can’t have.)

Adding to the film’s disastrous tonal miscalculations is the soundtrack, which feels curated by an extraterrestrial who has only just discovered music. Rosie’s hopeful wedding to her daughter Katie’s father, a putz she slept with once after a school dance, begins with Lily Allen’s melancholic break-up ballad “Littlest Things,” while the little girl’s birth is accompanied by Salt-N-Pepa’s sex jam “Push It.” If the song choices are meant to be funny, the humor falls entirely flat — just like every single one of the film’s jokes.

Collins is perhaps the one note of grace, rising above the material with an affable openness that breathes some freshness into the stale and sickly-sweet proceedings. But her transformation from an 18- to a 30-year-old is wholly unconvincing, as is that of Claflin, who is betrayed by an underwritten role that simply has him flitting from gorgeous blonde to gorgeous blonde. Love is patient, as the old saying goes, but love earns that patience, while “Love, Rosie” does not.