“We will not be moving forward with a second season of Lovecraft Country. We are grateful for the dedication and artistry of the gifted cast and crew, and to Misha Green, who crafted this groundbreaking series. And to the fans, thank you for joining us on this journey,” HBO said in a statement provided to TheWrap.

Based on the novel by Matt Ruff, “Lovecraft Country” followed Atticus Freeman (Jonathan Majors) as he journeys with his childhood friend Letitia (Jurnee Smollett) and his uncle George (Courtney B. Vance) on a road trip from Chicago across 1950s Jim Crow America in search of his missing father Montrose (Michael Kenneth Williams). Following the journey, they must deal with supernatural horrors and racist terrors alike. 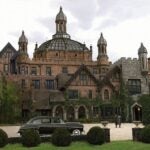 The book is a standalone work, but similar to other HBO shows based on novels with no sequels, such as “Big Little Lies,” HBO and the show’s creators were discussing the possibility of a second season.

The series was produced by afemme, Inc., Bad Robot Productions and Monkeypaw Productions in association with Warner Bros. Television.