If adding Mr. Pretty Face TV Star Rob Lowe to the much-loved (but still underwatched) "Parks and Recreation" sounds like just the sort of stunt a network suit would suggest to boost ratings, that’s because it was. 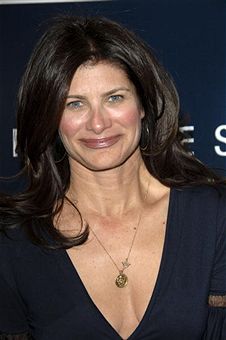 It turns out that Lowe’s casting was the brainchild not of "Parks" producers but of NBC Entertainment chief Angela Bromstad (left). She and other NBC brass love the show, but believe it could benefit from some added star wattage.

And that’s where Lowe — as well as several other notable changes coming to the ficitional town of Pawnee, Ind. —  comes in.

"They want Rob to be their Alec Baldwin," one agent familiar with NBC’s thinking says.

It’s not that "Parks" — already picked up for a third season — needs more comic genius, a la Baldwin. The show already boasts one of the hottest comedy ensembles on TV, including the blowing-up Aziz Ansari, cult comedy hero Nick Offerman and, of course, star Amy Poehler.

Instead, what NBC is hoping is that the supremely good-looking Lowe, like Baldwin, will help lure more viewers — particularly females — who otherwise would never consider checking out the Poehler-led "Parks." Airing Thursdays at 8:30, "Parks" currently does much better with young guys than women, with its overall adults 18-49 rating averaging around a 2.3.

"He’s the world’s handsomest male. He’s like a very bright beam of light," "Parks" exec  producer Mike Schur admitted, only half-kiddingly. "We wrote a line for Amy in Rob’s first episode in which she says that she accidentally looked into his eyes and it was like staring at the sun."

So the producers of "Parks" are secretly fuming over Lowe’s arrival, were forced to hire him and are convinced he’s going to ruin everything that’s awesome about the show, right?

While Bromstad had the idea of going after Lowe following his decision to exit ABC’s "Brothers and Sisters," his character (more on what he’ll play later) came from an idea pitched to NBC by the producers at the end of last year.

In other words, it’s not as if the network told the producers to whip up some excuse to bring Lowe to Pawnee.

VIDEO: Check out Lowe and Scott on-set in "Parks"

As they mulled, Bromstad’s boss — NBC Universal entertainment chief Jeff Gaspin — caught wind of the possibility of bringing in Lowe. He was so high on the concept, he summoned the producers to his office to lobby them on Lowe’s behalf — and assure them the network didn’t want to change the fundamental DNA of "Parks" to make Lowe fit in.

Gaspin, Schur explained, insisted the "goal was to add him to what we’ve already got. (Lowe was) not going to suddenly get half the screen time," he says. "So at that point, we said, ‘Why are we even thinking about this? Let’s try it’."

Rather than fixing what’s not broken, NBC is praying that Lowe will be the the bright, shiny object that gets the 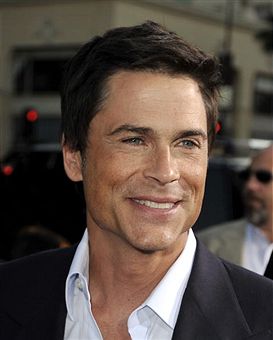 pop culture machine to pay attention to "Parks" in a big way.

The comedy already gets lots of love from TV critics and the bloggerati, but Lowe could convince the People/US/"Entertainment Tonight" contingent of the media to start mentioning the show more often. Viewers, presumably, will follow.

"This is like us buying a Super Bowl ad," Schur said.

Indeed, with NBC’s overall ratings woes and dearth of monster hits, it doesn’t have all that many platforms to attract new viewers.

"We just need to do things to be noisy and move the dial a little bit," Schur said.

For now, Lowe is only locked in to eight episodes of "Parks": two airing at the end of this season next month, and six next fall. He and another newly-hired cast member — Adam Scott of Starz’s buzzworthy "Party Down" — will play two auditors hired to "hack away at the budget and save Pawnee from going bankrupt," Schur said. "They enter the world as black hats."

Lowe’s character will be charming and upbeat, a popular figure despite his job. Scott, however, will be more of a hatchet man. Scott’s locked in to a long-term run on the show, while Lowe will stay on only if he and the producers both feel things are working out well.

Leaving the show no matter what: Original cast member Paul Schneider, whose character never really had a  long-term place in the Pawnee universe. Producers say his exit was already set in motion even before the hirings of Lowe and Scott.

In addition, Schur and Daniels have recruited their former "Saturday Night Live" and "King of the Hill" colleague Emily Spivey to join the "Parks" writing staff.  Spivey wrote for Poehler on "SNL" and should fit in nicely.

NBC won’t have to wait long to see how all of these changes play out. Production on season three was moved up by several months after Poehler announced she was pregnant. As a result, Lowe’s first batch of episodes will be shot by June, with a decision on extending his run expected by then as well.

"Rob’s really, really good And he’s just funny," Schur said. "Some of the fans have expressed fears that he won’t fit into the world (of Pawnee), but I think those fears will be allayed when they see him. He’s handsomer than everyone else, but he’s also happy to be part of a large ensemble.

"He fits in because he’s being really funny."