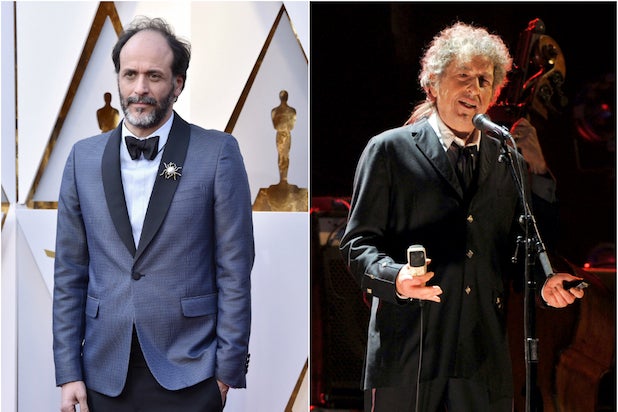 Luca Guadagnino’s next project is inspired by one of Bob Dylan’s most iconic albums.

The “Suspiria” director is attached to direct a film based on Dylan’s 1975 album “Blood on the Tracks.” “The Fisher King” scribe Richard LaGravenese will write the screenplay, individuals with knowledge of the project confirmed to TheWrap.

The film is based on an idea by RT Features’ Rodrigo Teixeira, who is producing with Guadagnino, reteaming with him after previously producing “Call Me By Your Name.” RT’s Sophie Mas and Lourenço Sant’ Anna are executive producing alongside Marco Morabito.

Also Read: Tilda Swinton Says She Is That Old Man in 'Suspiria,' After All

The film will revolve around some of the central themes of Dylan’s album, which included “Tangled Up in Blue,” “Simple Twist of Fate” and “Shelter from the Storm.”

“Bringing this project to life is a dream to me,” Teixeira said in a statement. “We worked for a very long time to find the right way into Bob Dylan’s work and having collaborators such as Luca and Richard are an absolute privilege.”

The project was first mentioned in a profile of Guadagnino in The New Yorker, which described a meeting between Guadagnino and LaGravenese. The article said that Guadagnino was asked to direct the project, but only if LaGravenese, who he had previously never met, would write the screenplay. It also said that LaGravenese wrote a 180-page screenplay between April and July.

“When they’re repressing, we dramatize the repression, and what that does to them,” LaGravenese told The New Yorker. “And we dramatize what happens when you let your passions take over too much.”

Dylan’s “Blood on the Tracks” will receive for a massive reissue on Nov. 2 as part of Dylan’s Bootleg Series. The deluxe, six-disc collection, “More Blood, More Tracks,” features previously unheard, alternate versions of many of the album’s songs, and details how the album came together over just six days at studios in New York and Minneapolis in 1975.

Guadagnino’s remake of “Suspiria” opens on Oct. 26. He’s also planning a sequel to “Call Me By Your Name.” LaGravenese last wrote the 2016 film “The Comedian” starring Robert De Niro.

RT Features is currently in post-production on Robert Eggers’ “The Lighthouse,” starring Robert Pattinson and Willem Dafoe with A24 and New Regency, as well as James Gray’s “Ad Astra” starring Brad Pitt for Fox.

Guadagnino is represented by WME and LaGravenese and RT Features by CAA.