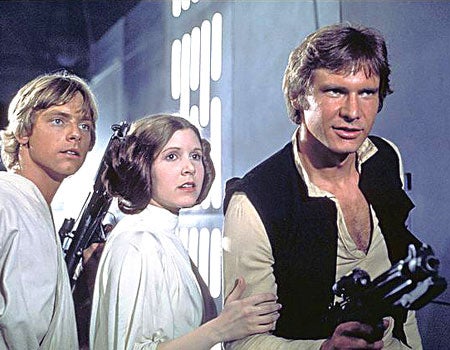 George Lucas just can't stop fiddling around with his galaxy far, far away.

If the inveterate tinkerer has his way, Han, Luke, Leia and Chewie may be headed for yet another makeover.

This time the rebel insurgents and the evil empire may be getting the 3D treatment … and we have "Avatar" to thank for the upcoming conversion.

At an HBO afterparty following Sunday's Golden Globe awards, the director told Access Hollywood that James Cameron's monster hit has convinced him that the technology has evolved to the point where he was willing to reconfigure the outer space series so it could be viewed in three dimensions.

“Haven’t been a big fan of 3D, but that movie definitely improves in (the field of) 3D," Lucas added.

Before he heads back into space, however, Lucas will film "Red Tails," which tells the story of the Tuskegee airmen, according to Access Hollywood.

This isn't the first time Lucas has re-visited the original trilogy. In 1997, the director spent over $10 million up revising the movies he shot in the 1970s and 80s and inserting scenes and characters that exploited CGI technology.

Though the subsequent theatrical re-releases were box office successes, many of the director's changes were bemoaned by fans who believed that they weakened the arc of central characters such as Han Solo by scrubbing away their harder edges.

Lucas festooned the movie with new digital alien creations, inserted a scene with Jabba the Hutt in the first film, and changed a cantina shoot out to have the alien Greedo fire the first shot at Solo instead of the other way around.

As for the director's other attempt to revisit the Star Wars galaxy some 20 years later, well, that can be summed up in three words — "The Phantom Menace."