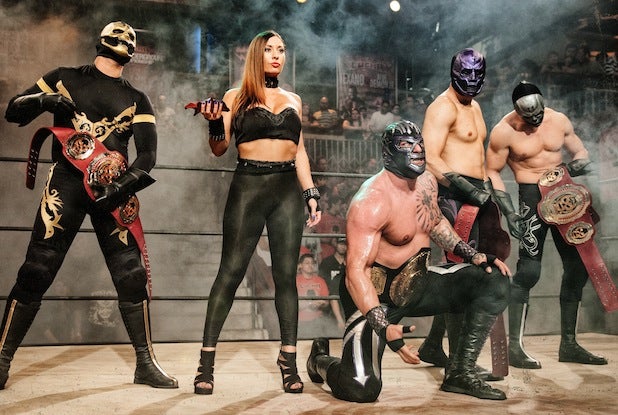 “Get me a goddamn microphone! RIGHT! NOW!”

It’s hard to see why Jack Evans needs a microphone. Even surrounded by a screaming audience, the cocky wrestler’s voice reaches the rafters. His ring attire may be even louder: neon-green flames cover his shorts, and his forearm-length gloves are a a keypad away from looking like Nintendo Powergloves.

Standing across the ring is Evans’ opponent: a masked luchadora named Sexy Star, a Latina heroine whose magic wand gives her a dash of magical-girl anime, and whose blue-and-purple cape suggests a butterfly. Her easy confidence captures the crowd in a way Evans’ swagger cannot, and the hotshot can’t take it. Evans snatches a mic and whips the fans into a frenzy by threatening Sexy Star, nose to nose:

“When this match is over, they’ll be calling me…the Star Destroyer!“

Within moments, Evans is writhing on the mat, victim of a Sexy Star smack that makes a sound like a leather strap. At a time when the entertainment industry is lambasted in studies and hashtags over its lack of diversity, one answer to the problem is here in industrial Boyle Heights, not far from Hollywood, in a century-old warehouse called the Temple.

Evans and Sexy Star are doing battle for “Lucha Underground,” which debuted in 2014 on the fledgling El Rey Network and is filming its third season now. For El Rey, which was created by auteur Robert Rodriguez as a sort of AMC for grindhouse and genre flicks, “Lucha Underground” has been a breakthrough hit with a mix of comic-book storytelling, neo-noir aesthetics, and of course, chaotic fights. Unlike other continuously running wrestling shows, it airs in seasons, like any other scripted drama.

What started out as a bunch of wrestlers brawling in an underground fight club has turned into a cosmic conflict in which titans and ghouls share the ring with street thugs. Like Marvel teasing the Infinity War, “Lucha Underground” promises an eventual clash between all of its larger-than-life characters — one that will fulfill an ancient Aztec prophecy. 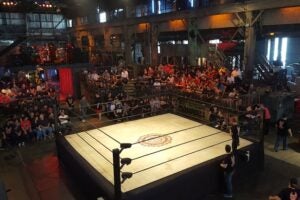 But amidst the macho melodrama, “Lucha Underground” has quietly become one of the most unexpectedly progressive shows on TV, with one of the most diverse casts in television today. While WWE is only just beginning to answer the call for stronger storylines for their female wrestlers, Latinas like Sexy Star have played a core role on “Lucha Underground” from the start.

“Sexy Star represents the female character I’ve wanted to see in wrestling since ’99,” wrote Ariana Vives in an article for Bitch Media. “A hero who looks out for others, a Latina who uses English and Spanish interchangeably, a person who reflects the face of a growing, changing population… I want to lace my boots up with her.”

Latinas don’t just play superheroes on “Lucha Underground” — they play villains too. One of the most prominent characters of Season 2 is Catrina, played by former WWE wrestler Karlee Perez. In the first season, she was introduced as the valet of Mil Muertes, an enormous bruiser brought back from near death after being buried alive in an earthquake as a child. Now it’s becoming clear that she’s the one making all the decisions for the duo.

“I knew Karlee from our days in WWE,” said showrunner and former WWE writer Chris DeJoseph, “so when we were writing Catrina we knew she was a talented woman, and we wanted Catrina to be more than a beautiful escort. We wanted her to have control and have motivations that not everyone knew right away.”

“There’s never going to be a moment of weakness with her,” added Perez. “There may be some up and downs and her plan may be foiled, but she wants you to think that she’s lost… In the future you’re going to see a lot of her backstory and why she wants all this power.”

Catrina’s plans have led her to face off with a wide range of Mexican luchadores. There’s Fenix, an immortal acrobat whose rivalry with Mil Muertes has become a symbol for life vs. death. There’s also Pentagon Jr., a bloodthirsty maniac whose bullheaded desire to inflict pain on everyone around him has become a wrench in Catrina’s machinations.

But Catrina’s biggest rival is the Temple’s founder, Dario Cueto, played by one of the show’s few trained actors, Luis Fernandez-Gil. Fernandez-Gil has recently grabbed network airtime with a recurring role in NBC’s “Telenovela,” but on “Lucha” he is the biggest star. Like Catrina, Dario is a schemer, putting obstacles in the heroes’ way and tempting luchadores with “unique opportunities” to make sure the Temple is a madhouse of violence.

But deep down, there’s a vulnerability that only recently has been seen through the cracks of Dario’s smug veneer. Fernandez-Gil explained that Dario’s motives go beyond bloodlust.

“He has gone through a lot of injustice in his life, and he wants to prove that no matter what the circumstances, he survives. He loves violence so much because unless you’ve been exposed to the limit of being alive, the animalistic will we have to survive doesn’t come out,” said Fernandez-Gil. “It’s important to him to have that constantly present, so that when you face death, you appreciate being alive. Everything he does is based around that principle.”

The rest of the show is a ripple effect of feuds and competition stemming from Dario and Catrina’s actions, but all the characters blend Mexican and American wrestling styles. Along with the masked luchadores are WWE alums and muscle-bound heavyweights who fit in more closely with American pro wrestling. The show’s elaborate backstage vignettes are performed in English and Spanish.

The audiences at tapings primarily include East L.A. millennials — second or third-generation Latinos who have had American pop culture and Mexican heritage woven into their upbringing. It is in this hybrid, borderland culture that “Lucha Underground” thrives, creating a style unlike any other on TV today.

Long after Evans and Sexy Star’s fight, executive producer Eric Van Wagenen remains behind in the empty Temple. Van Wagenen has spent years working on reality shows like “The Apprentice” and “Survivor.” But despite his success on the major networks, he says the Temple is where he’s had the most fun and freedom. He credits Rodriguez, also an executive producer on the show, with creating an organic environment that’s been key to its success.

“We’re very lucky to be on a network and have a guy like Robert that just lets us takes the chains off creatively… we don’t have to think about investors or advertising or anything like that,” he said. “As for the diversity, we just took our cues from what’s around us. We’re in Los Angeles, and here, Hispanic culture is just a part of everyday life. The language is spoken here. The food is found everywhere you look. All we’ve done is embrace what we have right here in Los Angeles and let the show be a natural reflection of where we live.”

Lucha Underground airs Wednesdays at 8 PM on El Rey Network and is available on iTunes. Check out some exclusive photos from the three-part season finale, “Ultima Lucha Dos”

When "Lucha Underground" debuted in the fall of 2014, it grabbed the attention of hardcore wrestling fans everywhere. El Rey Network's Boyle Heights-based action show became an alternative to WWE's more mainstream fare, featuring a surreal, dark mythos dedicated to creating story arcs that built on top of each other. To the delight of its rabid fans, it got renewed for a second season, a season that ends this month with the three-part event, "Ultima Lucha Dos."