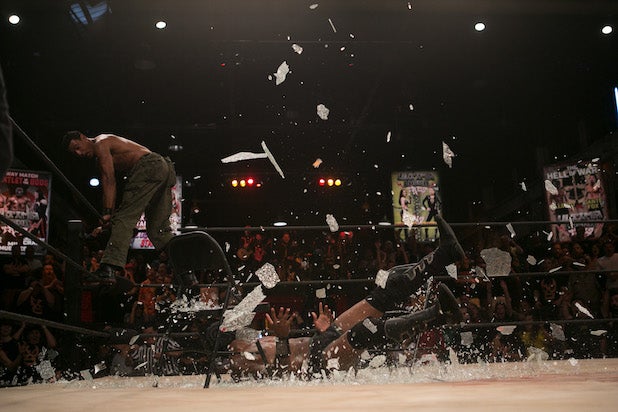 With a towel shrouding his face, pro wrestler Shane Strickland is helped to an ambulance waiting outside the abandoned Boyle Heights factory where he just brawled for more than half an hour. His back is covered in fresh wounds shiny with blood and small, glimmering pieces of broken glass.

Over his shoulder, stage crews sweep away shards on which his body was repeatedly slammed, with cruel abandon. Among the debris carted away is a broken medical stretcher with a large chunk of human skin on it, a pile of broken tables, dented metal chairs, and several yards of barbed wire. A woman hoses down a blood-stained wrestling ring for the third time this evening.

Scattered around the ambulance are dozens of Strickland’s fans, who offer stunned applause and cuss-filled cheers as his wounds are treated. In one dripping, sanguified hand, Strickland holds a black mask that bears a marksman’s crosshairs on the front.

It is the mask of Strickland’s luchador alter ego, Killshot.

Nineteen months later, Strickland sits on a weight bench in a makeshift gymnasium built in the heart of L.A.’s warehouse district. A slight smile graces his face as he’s asked about the wrestling match that became one of the bloodiest ever aired on TV and made Killshot into one of the top stars on “Lucha Underground,” which kicks off its fourth season on El Rey Network this week.

When he was introduced on “Lucha,” Killshot was merely an extra, seen in a few matches, whose main role was to lose to more prominent luchadors on the show’s first season: classic pro-wrestling “talent enhancement” booking. But Strickland didn’t join the show to simply be another body, and before the show’s second season began, he took it upon himself to give Killshot a military makeover.

“I wrote three different synopses for my character and sent them in to Chris DeJoseph, the showrunner,” Strickland recalls. “He liked it and kinda put together all three of them.”

When the show returned for Season 2, “Lucha” fans were introduced to a new Killshot; a trauma-stricken Army sniper who turned to lucha libre to channel his rage after he was the only survivor from his Afghanistan unit. Strickland jumped right into the role, filming backstage vignettes with director Skip Chaisson that required him to do stunt work, choreographed combat and firearm training.

Having already bought into a TV show featuring wrestlers that are half-man, half-dragon, the fans at Boyle Heights quickly embraced Killshot as he feuded with one of the show’s sleaziest villains, Marty “The Moth” Martinez. Killshot gained a reputation for being one of the most versatile wrestlers in the cast, capable of putting on technically sound matches with Mexican luchadors or getting brutal in hardcore matches. Strickland says that’s always been his goal.

“My style is more counteractive,” he said. “It’s more defense into advancement. Killshot is always about adapting to his opponent and that came from my experience in the ring. My opponent changes my match.”

But when Season 3 rolled around, it was time to give Killshot a personal rival, portrayed as a former comrade in his unit who blames Killshot, in their storyline, for leaving their team to die. Enter Dante Fox, played by T.J. Ballester, a wrestler Strickland has performed with many times.

Ballester joined “Lucha Underground” in 2016 after making a name for himself alongside Strickland in Combat Zone Wrestling (CZW), an ultraviolent New Jersey indie fed known for its annual “Cage of Death” match. In this world where weed wackers, syringes, and light tubes are regularly used against the human body, Ballester became a star, soon competing in other American indie promotions like Dragon Gate USA and Evolve.

In the ring, Dante Fox sports a determined scowl and, all too frequently, a weapon. Backstage, Ballester bears only a friendly, enthusiastic grin as he talks about how he got his start diving onto thumbtacks as a teenage backyard wrestler in Connecticut. After some professional training, Ballester turned his casual disregard for his own well-being into a job in CZW, and after working his way up from suicide dives to ladder matches, he entered the Cage of Death in 2015 and got his first taste of shattered glass.

“I didn’t know what to expect, so I just decided to go through the glass as the first move of the match,” Ballester said. “I just wanted to get it over with. I didn’t want to wrestle for five minutes and see other people crash through glass. It would have been too nerve-wracking.”

“After the match, I had all these cuts all over my body, but they took me to the hospital because they were thought that the glass had impaled me and punctured my lungs or somethin’. But at the end of the day it’s just cuts and scratches. The adrenaline is enough for me to fight through it.”

It may be cuts and scratches, but wrestling is already a performance art built on trust. Even in a regular match, a botched move could injure a wrestler for months, or worse. Throw in weapons that can concuss or lacerate, and the level of trust between wrestlers needs to high.

Fortunately, Strickland and Ballester spent years building that trust in CZW matches. So when Dante Fox entered “Lucha Underground” to get long-sought revenge against Killshot, fans were treated to a series of matches between two men who knew how to get the best out of each other, with spots — big moments in a wrestling match — that escalated the danger factor.

“I always wanted to tell this story with Killshot. Dante’s like the Sabertooth to his Wolverine,” Strickland said. “Every time we had a match, we sat down and compared ideas. I said, ‘Well, I want to do THIS,’ and he’d respond by suggesting something even crazier. We were both on the same wavelength we know we could make it work.”

That trust culminated on that gory summer night in Boyle Heights, as “Lucha Underground” filmed its Season 3 finale. Killshot and Fox faced off in “The Hell of War,” a best-of-three hardcore series that saw the pair stun the crowd as they threw each other through barbed wire boards and glass panes.

These are the sorts of bloody, dangerous matches WWE, the world’s largest and most successful pro-wrestling promotion, would never touch, even during its edgy heyday in the ’90s. It’s the realm of ultra-violent wrestling that you could only see these days online through videos of promotions like CZW, but which were almost never seen on TV until “Lucha Underground” arrived.

“There had already been some really bloody matches on the show before, but we wanted to raise the bar even further,” Ballester said.

But the pair saved their most horrifying idea for last, as Fox and Killshot took their fight up to a 20-foot-high perch overlooking a stack of glass panes and tables. But before Fox could land the finishing blow, Killshot stunned him with a tequila bottle, sending him falling off the perch and through the stack to the ground below.

“I remember when I hit the bottom it was like the other times I’ve done stuff like that,” said Ballester. “I just thought, ‘I’m OK.’ It hurt, but I was going to be OK.”

Amazingly, despite being covered in bandages, both men suited up and competed in a match the very next night, completing Killshot and Fox’s arc as the two reconciled and won the Lucha Underground Trios Championship. For Strickland, it was the completion of a story he longed to tell through wrestling, and with Season 4 kicking off, he teases that making peace with Dante is only the start of a new struggle for Killshot.

“I want to go even deeper into his mind and what makes him tick. Now that he’s champion, now that he’s buried the hatchet with Dante, what is going to make him want to keep going? Does he still have that motivation to keep wrestling, or does he think, ‘I found my brother, I don’t need this anymore’?”

This is what Shane Strickland loves the most about “Lucha Underground,” and why he and the rest of the show’s cast are willing to suffer for their characters. Never before in his career has he been able to take his passion for wrestling and use it to create a luchador who seems to have walked out of the pulpiest noir comic book ever written.

“Along with wrestling, I grew up watching movies, and now I get to combine the two together,” he said. “The writers for the show are so open to new ideas and they work with us to help build this big, overarching story, and it’s really cool being a part of it.”