(Warning: This post contains spoilers through the Season 5B finale of “Lucifer.”)

After five seasons of telling people the God’s honest truth that he’s the Devil, Tom Ellis’ Lucifer did the unthinkable on the Season 5B finale of “Lucifer”: He became God.

To go from ruler of Hell to the Lord on High is a pretty big career change for Lucifer heading into the final season of the Fox-turned-Netflix drama, so here to break down that evolution for TheWrap is Ellis himself. And of course, we talked about the moment that allowed Lucifer to become God — which was when he sacrificed his own life for that of his love Chloe Decker (Lauren German) and told her he loved her for the first time ever, after a gigantic fight at the Los Angeles Memorial Coliseum.

See our Q&A with the almighty Ellis below.

TheWrap: What was it like shooting the big fight scene at the end of the finale, between the angels and demons, led by Michael and Lucifer — so you and you? And how would you compare it to the Season 5A finale, which was you and you in hand-to-hand combat?

Tom Ellis: That one was indoors under A/C, this one was at the Coliseum. It was boiling, oh my God. It was when we first got back, actually. This is the sequence that we shot after we’d broken down for COVID. So we had a few months and we came back and went straight into this sequence. My God, it was a sweaty affair. And it was quite a lot of days. Most of the stuff on the wires was done by Morgan [Benoit], my stunt double. But I had done quite a lot of the wire work now myself. I’m glad I’ve already got children, put it that way. Like, it’s quite the tight-fitting affair and requires a lot of patience and deep breathing. It was a very, very ambitious sequence that we went for, and I don’t think it’s a sequence we could have done even three years ago on the show, because it relied on the advancements in the technology that we use. The special effects department just had a field day doing that. They loved it. Watching it back, all the elements have conspired brilliantly. I think it’s really paid off.

That fight scene leads to Chloe’s death at the hands of Michael — and then her resurrection when Lucifer selflessly goes to heaven, risking his own life in exchange to bring Chloe back to Earth, and is finally able to tell her he loves her before what he thinks is going to be his demise. How would you describe Lucifer’s journey to that sacrifice, as it’s what ultimately allows him to become God?

I’d always had it in my head that Lucifer saying to Chloe “I love you” was almost like in “Willy Wonka and the Chocolate Factory,” where Charlie puts that little gobstopper down and walks off, and then Gene Wilder goes, “You won, Charlie. You won.” That, for me, was always that moment with Lucifer telling Chloe that he loved her. I didn’t know how it was going to transcend and how it would be in our story, but it felt like the perfect moment that Lucifer has proven himself and proven that he is capable of love and not just love for himself, but love for other people. That’s the breakthrough. And what does that set up for Season 6? It sets up Lucifer in line to probably take over the God job. And you can imagine how that might pan out. 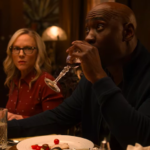 Before that moment, Lucifer was working hard to become God, first because he just liked the idea and then because of Dan’s death — he felt he needed to be because he couldn’t allow Michael to get the job. But it wasn’t until he did this act for Chloe that he got the power. Why do you think that is?

That’s the thing. Like you say, he was doing it for the wrong reasons. We know that any kind of big role in life that you take on, you’ve got to do it for the right reasons; otherwise it isn’t going to work out properly. And certainly that job. It’s so weird, if I think back to five years ago, starting this show, and if you told me what was happening, I would be like, are you crazy? But actually, it speaks to what this whole show has been about, which is Lucifer’s evolution, his journey to redemption.

What does it feel like to have one more season left of “Lucifer” — for real this time?

Well, we’re wrapped, we’re done, we’ve finished it. It was strange. I mean, most of Season 5 we thought was going to be the end of “Lucifer,” so I spent a lot of time coming to terms with that during Season 5. I was using that season to process it all and just appreciate everything that happened. Obviously, COVID sort of ruined it a little bit early and then the whole Season 6 of it was a surprise. But coming back and doing Season 6 was quite cathartic, actually, in a weird way. I was incredibly sad to finish, but I was also incredibly at peace because I felt like we’d finished the right way. I felt like we told our story, which is the most important thing. And I walk away from the experience with an abundance of new friends. So I didn’t walk away from that set going, ‘I’m never going to see anyone again,’ because I know I’m going to see loads of people again. You know, the saddest thing was saying goodbye to the crew, because those are the people you don’t really know when you are going to see them on the next job and stuff. But again, you know, I’ve got my mates in the crew that I’m going to be mates with outside of work. I’m just grateful that we had six years, because that’s really what you hope for. I’m grateful we had six years and we were able to tell our story and people wanted to listen to it. 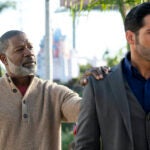 Also Read:
‘Lucifer’ Musical Episode: Here’s the One Song Producers Couldn’t Use – and How Tom Ellis Solved the Problem