ABC’s “Lucky 7” starts with the classic “what if” scenario – striking it rich at the lottery – and subverts it with a heist gone bad. 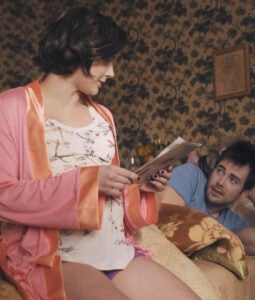 For years, the workers at the Gold Star Gas N’ Shop in Queens have been pooling their money on lottery tickets, and with the prize money at $45 million, they can’t help but fantasize about what they would do with the windfall: The boss’s wife would go to Bora Bora, Matt (Matt Long) would move his pregnant girlfriend and their other kid out of his mother’s house, and his ex-con brother Nicky (Stephen Louis Grush) would pay off his debt to threatening characters. Musician Samira (Summer Bishil) would finally be able to afford Juilliard.

Matt is so desperate for money that he lets his brother talk him into a cockamamie scheme to rob lottery ticket money from the store. When that plan goes inevitably awry, it taints the group’s happiness over the winning number. It also causes the cops to come sniffing around.

“Lucky 7” is at its best when it is exploring the uneasy workplace alliances that develop in situations like these: Should the guy who was short of money be eligible for the windfall? How about the other coworker who contributed for years before saving the money for his wife and family?

While coworkers grapple with those issues, friends and families are busy mentally spending all that loot.

“We can move in to Manhattan, I guess, or better yet Jersey,” Matt’s girlfriend enthuses. “It’s great for the kids. I always wanted a place in the suburbs.”

Alas, the characters and scenarios are stroked way too broadly in the pilot. Insecure Denise (Lorraine Bruce), desperately trying to shed pounds and stop her husband from straying, is particularly grating. And did Samira’s taxi driver father have to be that cartoonish? It also strains credulity that supposedly nice guy Matt would agree to his brother’s scheme.

For that matter, it strains credulity that Long and Grush are siblings. Perhaps they are brothers of another mother.

The pilot, executive produced by Steven Spielberg, flashes forward with a car chase suggesting that the two siblings are living large in the future. Whether or not “Lucky 7” strikes it rich with ratings remains to be seen.