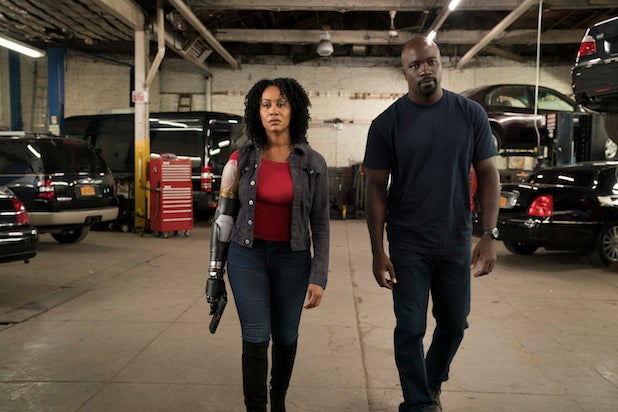 “There’s various ways to create the look of a one arm,” Maslansky told TheWrap in an interview ahead of Season 2’s drop on Netflix Friday. “One of them is very low-tech, and it revolves around hiding the fact that you have an arm, and it’s done with cutting away, and costume, and you know, making a fake stump, and a variety of ways. And the other way is, of course, very high tech, and that’s the usage of a green sleeve.”

Maslansky, who has worked on other Netflix Marvel shows “Daredevil,” “Jessica Jones,” “Iron Fist” and “The Defenders,” said that although that high-tech option is “expensive and time-consuming,” it pays off for the big scenes, like Misty and Colleen Wing (Jessica Henwick)’s fight in the bar.

Also Read: 'Luke Cage' Season 2: What Exactly Is 'The Incident'?

“I think it’s pretty obvious that that’s what was done in the fight between Misty Knight and Colleen Wing, and those guys in the bar,” she said. “That was pretty amazing.”

For less intensive scenes, however, Maslansky said “there’s a variety of ways to accomplish movie magic.” Or in this case, TV magic.

“The other way is, like I said, very low-tech, and that requires just some trickery, in terms of hiding the arm and shooting various angles when you’re shooting around the arm and scenes in which the arm isn’t there and it’s obvious that it isn’t there,” she explained. “So we had to be very careful about the clothes that we used, because they couldn’t be too tight, because it would be impossible to hide the fact that there was an arm.”

Maslansky added that it’s a “concerted … collaborative effort of camera work and costuming” to pull it off.

“In this particular case,” she said, hiding one of Missick’s arms was “tricky.”

“But it was a great challenge, and I really enjoyed it,” she continued to say. “I don’t believe I’m going to have to do it again, because now she has a bionic arm, but you know, you never know.”

“Someone else could very easily lose a limb and then I’d have to play the same game and routine,” she said with a laugh. “Marvel likes to mix it up.”