Spoilers for “Luke Cage” Season 1, and “The Defenders,” below.

Steel yourselves fans: the Daughters of the Dragon may yet happen, judging from the first photo of Misty Knight (Simone Missick) in the second season of “Luke Cage.”

Marvel comics fans have been nervously eying Misty’s intact right arm since the hard boiled NYPD detective made her first appearance in “Luke Cage” Season one. That’s because Misty’s comic book counterpart famously has a powerful bionic arm that she received after losing her first one in an explosion.

Well, as we see from the photo below, exclusive to EW, when we pick up with Misty and Luke (Mike Colter) after “The Defenders,” she’s finally received that arm. 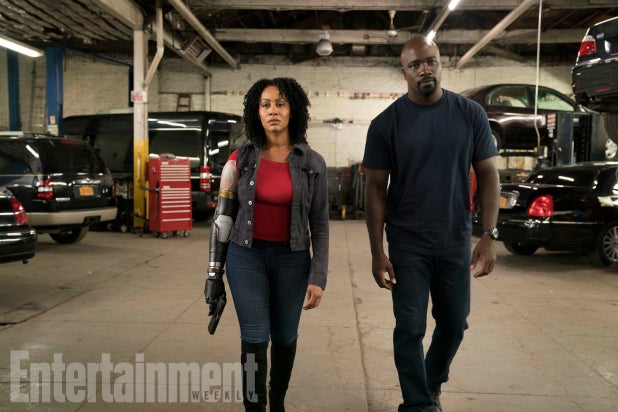 On Netflix, Misty didn’t lose her arm in an explosion. Instead, in the final episode of “The Defenders,” the villain Bakuto chopped off Misty’s arm above the elbow with a samurai sword (just before a building was destroyed in an explosion, a nod to Misty’s comics backstory).

We have no clue whether TV Misty’s bionic arm comes with the powers enjoyed by the comic book version, like energy blasts, super strength, or the ability to wirelessly hack and control advanced tech (AKA the “technopathy” superpower). But it is dexterous enough to handle a police-issue sidearm, and that’s nothing to sneeze at.

In the comics, Misty got her upgrade courtesy of Tony Stark. Tony won’t be showing up in the Netflix Marvel universe, but in “The Defenders,” Misty was last seen recovering in a hospital owned by Danny Rand (Iron Fist), where she was promised “cutting edge” help. Looks like Danny, or at least his money, will be filling in for Iron Man there.

One last comic book note: Misty Knight and Colleen Wing (played by Jessica Henwick in “Iron Fist” and “The Defenders”) are close friends who form a private detective agency and later on, a superhero team called Daughters of the Dragon. The two met for the first time during “The Defenders,” and it was Colleen who visited Misty in the Hospital to let her know Danny Rand’s deep pockets would fund her recovery. Hopefully, that was the beginning of a beautiful friendship.

So, we’re ready for the next season of ”Daredevil“ on Netflix