“Sons of Anarchy” veteran Theo Rossi steps out of his motorcycle boots and into the Marvel Universe on Sept. 30, when “Luke Cage” premieres on Netflix.

On the series, Rossi plays “Shades” Alvarez, Luke Cage’s nemesis and a manipulator of the highest order. As Netflix’s latest dive into the world of Marvel — following “Daredevil” and “Jessica Jones” — prepares to unleash itself, TheWrap provides a first look at Rossi’s character, and asks him about what it takes to be a Marvel baddie.

Read on for our conversation with Rossi.

TheWrap: Netflix’s Marvel series are known for their intense choreographed fight scenes. Will there be more of that with “Luke Cage”?

Theo Rossi: Their stunt coordinators are legitimately the greatest in the world. The guys they bring in are the top of . It started with “Daredevil” — those fight scenes in “Daredevil” were outrageous. And it continued on throughout. We just kind of take it to … that’s his thing, that’s what Luke Cage does — [he’s] just this bulletproof dude who beats the heck out of people … So there’s a lot of pretty incredible fight stuff.

Is there one fight scene that stands out for you?
There’s some stuff going on in Episode 4 that’s really cool. And it tells a tremendous amount about the story, as well as some really kick-ass fight stuff going on. That’s what I’ll say for now; I don’t want to say too much.

Shades wears sunglasses the majority of the time, which obviously limits your avenues for expression. What kind of challenges did that present for you?
I didn’t think about it, to be honest, until I was on set. And then all of a sudden you’re doing a scene, and you’re wearing these sunglasses in this dark nightclub, or these dark streets, because you know how the Marvel shows are — overall the tone is very dark. So besides the fact that you feel like you’re going to fall over every single thing when you’re trying to look cool, you have to figure out new ways to emote what you’re doing.

But it plays so incredibly well for the character because at best, and no pun intended, the character is super-shady. He is just a shady guy. He has this controlling nature, this very manipulative nature, so the sunglasses are kind of like this thing where you never really know what’s going on. And then as you watch this incredible story play out, it really starts to make a lot of sense. It sounds really weird to say that as an actor — it’s not like I was walking with a limp the whole time or doing whatever — but it is very odd to do something with sunglasses on, because an actor’s greatest tools are his eyes. 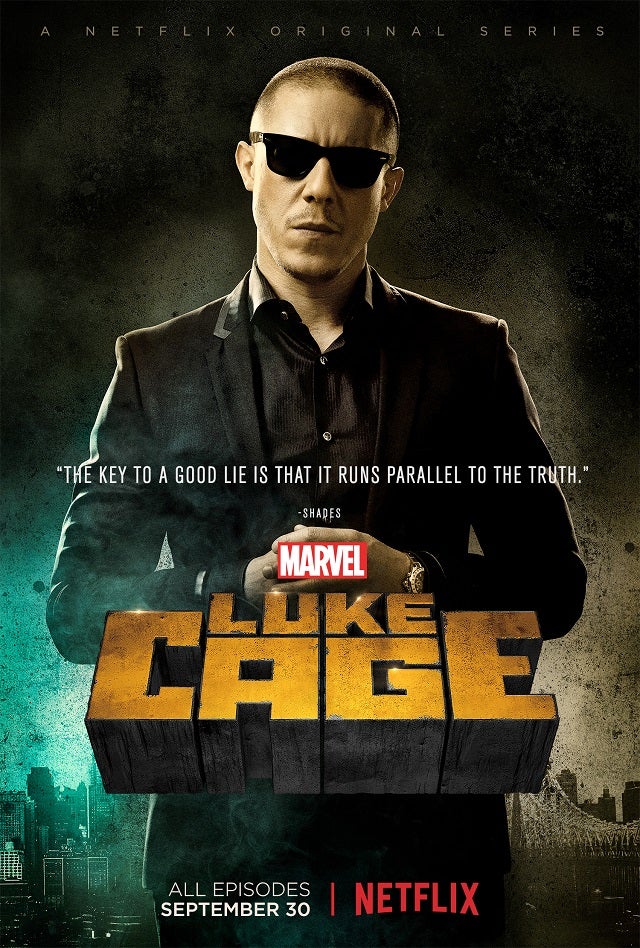 What were the other challenges in portraying Shades?
Sometimes as an actor you feel like, “I have to say and do all these things to get my point across.” And when you first meet Shades, he’s so cool, and he’s so laying in the cut and is kind of like a chess player. He’s manipulating at all times. Coming from these characters that I’ve played that are so physically charged, that are so emotionally charged, it was a bit of a change for me to go to someone who was so relaxed, and so calm, and so in control of himself. The truth is, it took me a little while to get used to that. Especially when you’re on a show for seven years, such as my last one, when you’re playing a guy who’s emotionally all over the place. You have to make this shift.

Emotionally calm? Manipulative? Chess player? It doesn’t seem that Shades has much in with Juice, your “Sons of Anarchy” character.
Literally the polar opposite. I couldn’t think of anyone that’s more opposite. In a couple of projects I’ve done and the stuff that’s coming up, you always get bits of Juice. But with this guy, with Shades, in this extremely cool world that we’re in, you can’t get a read on him. He’s so hard to get a handle on; you just don’t know what’s going on with him. And to play a character like that is really cool; you can’t get a read on him. With Juice, he wore everything on his sleeve, and this guy is not. And I think in this world, it fits really well.

How does your iteration of Shades differ from the comic-book version?
I think these guys, whether it be Shades, whether it be Cottonmouth, Misty Knight, to see them now, here and present, they’re very real. Sometimes in the comic books, especially in the ’70s, they could be written almost a little false, a little superhero-y. They’ve got the crazy outfits, there are certain ways that they’re larger than life in a way.

[But the characters in “Luke Cage”] are really kind of street-level. I believe that I could run into these people at any time. And that to me is the biggest difference. I know these guys. Growing up in New York, I know people like Shades Alvarez. I grew up with people like Cottonmouth. I felt that way with all the series, with “Jessica Jones,” with “Daredevil” — you related to the characters.

Also Read: 'Luke Cage' Star Mike Colter on Playing Black Superhero: 'We Did Not Have an Agenda'

Has there been any talk of you returning for another series or subsequent seasons of “Luke Cage”?
The way it works with Marvel — and it’s kind of the way of the business now, to be honest — is, I don’t care what level you’re at, they really don’t tell you anything. The way of the world, with social media, with the World Wide Web, everything is kept on the super-hush. Everything’s up to them. As of right now, I’m just super-excited for Sept. 30, and whatever happens and anything after that, you guys will probably be the second to know, right after I know.

Will Jessica Jones be making an appearance on the series? Obviously her story is very tied in to that of Luke Cage.
Who knows? Anything can happen on this series. Everyone knows that the night nurse, you’ve got Claire Temple bouncing around at all times, and she’s really that stitch that holds every one of them together, and Rosario [Dawson] does such an incredible job of doing that. So, everything’s linked, everybody’s in the same world — they’re in Hell’s Kitchen and we’re up in Harlem, so you never know.