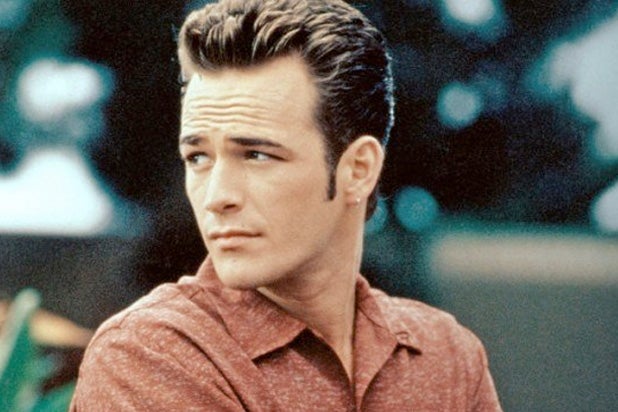 A little over 25 years ago, I spent some time with Luke Perry for a cover story in a now-defunct magazine. This was back in the days of “Beverly Hills, 90210,” when he was getting mobbed everywhere and had to be snuck out of mall appearances in a laundry hamper.

I remember sitting in my room at the Sunset Marquis while I waited for Luke to show up for the first interview and worrying that he wasn’t the kind of guy who would like me — i.e., I was a shy nerd and he had those sideburns and also a pot-bellied pig for a pet.

I was surprised to find how real and funny he was, how skeptical he was of his sudden fame, how he thought the whole laundry-hamper thing had probably been staged without his knowing.

He thought about taking me to a strip club for the first interview, but decided against it, telling me that I’d just end up writing something like, “Luke knew all the dancers and called out to them by name as we entered the club.”

Instead, he took me to a shooting range. It was cold so he lent me a jean jacket. I almost hit the first skeet and Luke was so excited for me. When it became clear that it’d just been a lucky accident and that I had no idea WTF I was doing, he was cool about it, though obviously a little bummed that I sucked.

When he was driving on the freeway in L.A., he pulled close to a woman in another car and asked if he could borrow her sunglasses. She handed them to him happily. I pointed out that she’d obviously recognized him. This hurt him a little. He didn’t want to believe it. He wanted to believe it was a just a cool, serendipitous human interaction. I said, “OK, then I’m gonna ask someone else for her sunglasses and we’re gonna see how that goes.” Luke loved this idea and immediately started looking for a woman in another car. I chickened out because I’m somebody who chickens out. He was cool about it, though (again) obviously a little bummed that I sucked.

When he was taking me back to the hotel after a long day, he told me about how he wanted to make a movie about a famous bull rider named Lane Frost. I was sleepy from the drive and said, “What is it about bull-fighting that interests you?” And he was, like, “Not bull-fighting, man! Bull-riding!” I felt like an idiot. He really cared about the project — which became the 1994 movie “8 Seconds” — and had been dying to do something real, something beyond “Beverly Hills, 90210.”

Lastly, I remember that I forgot to give him his jean jacket back, so as he drove away, I chased his SUV down Alta Loma Blvd. in the dark shouting, “Luke! Luke!” He didn’t hear me. I went into the Sunset Marquis and asked the guy at the desk if I could leave something for someone to pick up. He gave me a brown paper bag. I put the jean jacket in it and wrote LUKE PERRY on it with magic marker. I gave it to the guy, who looked at me like I was nuts, but whatever. I liked Luke and didn’t want him to think I’d stolen his coat.

Anyway, I’m remembering Luke Perry today because it’s so, so sad and messed up that he has passed away. He seemed like a tremendously good guy. Even in the midst of absolutely crazy, indecipherable fame, he was open and honest and didn’t give me any crap about being a shy nerd. I should also say that he gave the woman on the freeway her sunglasses back. He didn’t want anything (not even fame) for free.

BIO Jeff Giles
Jeff Giles is a contributing editor at Vanity Fair and the author of the young-adult fiction series, "The Edge of Everything." He was previously the deputy managing editor of Entertainment Weekly. @MrJeffGiles

Jeff Giles is a contributing editor at Vanity Fair and the author of the young-adult fiction series, "The Edge of Everything." He was previously the deputy managing editor of Entertainment Weekly. @MrJeffGiles