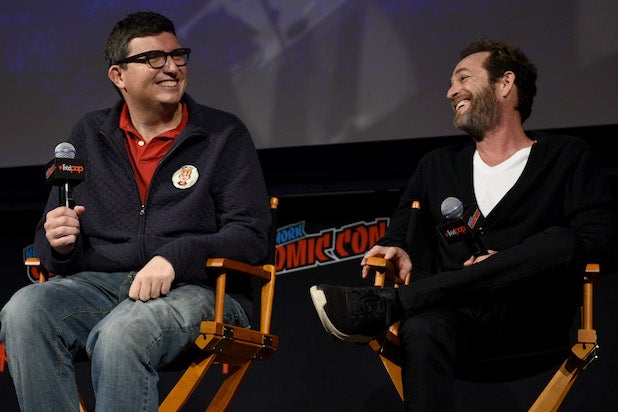 By all accounts, actor Luke Perry was a wonderful man. The team behind The CW’s “Riverdale,” which we’re told shut down production on Monday, will sure remember him that way.

Executive producers Roberto Aguirre-Sacasa, Greg Berlanti, Sarah Schechter and Jon Goldwater, along with studio Warner Bros. Television and network The CW released the below statement together on Monday.

“We are deeply saddened to learn today about the passing of Luke Perry. A beloved member of the ‘Riverdale,’ Warner Bros. and CW family, Luke was everything you would hope he would be: an incredibly caring, consummate professional with a giant heart, and a true friend to all,” they said. “A father figure and mentor to the show’s young cast, Luke was incredibly generous, and he infused the set with love and kindness. Our thoughts are with Luke’s family during this most difficult time.”

Perry, who suffered a stroke last week, played Fred Andrews on “Riverdale.” Fred is the father of main character Archie Andrews of the “Archie” comics, played on TV by K.J. Apa.

To-date, Perry appeared in 52 of the 57 “Riverdale” episodes. The show is currently in production on its third season and has already been renewed for Season 4.

Fox, which aired “90210” and last week ordered a six-episode event series where most of the show’s original cast (not including Perry) has signed on to play exaggerated versions of themselves, told TheWrap the following: “Luke will always be part of the Fox family. Our thoughts and prayers are with his loved ones during this extremely difficult time. He will be deeply missed.”

Read more about that revival (of sorts) here. Production has yet to begin, we’re told.