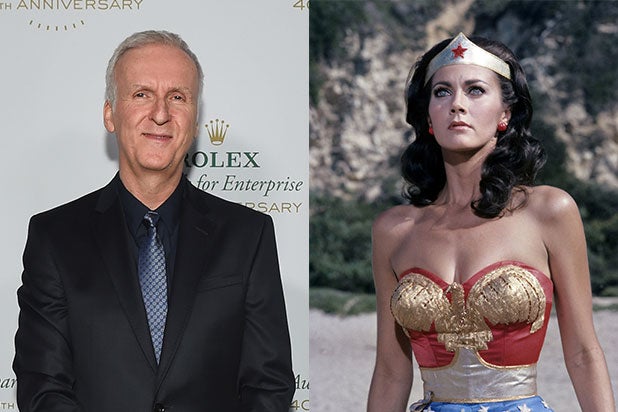 “To James Cameron – STOP dissing WW: You poor soul,” Carter wrote in a Facebook post on Thursday. “Perhaps you do not understand the character. I most certainly do. Like all women — we are more than the sum of our parts. Your thuggish jabs at a brilliant director, Patty Jenkins, are ill advised. This movie was spot on. Gal Gadot was great. I know, Mr. Cameron — because I have embodied this character for more than 40 years. So — STOP IT.”

In August, the Oscar-winning “Titanic” and “Avatar” filmmaker told The Guardian that “Wonder Woman” marked a “step backwards” for female characters.

“All of the self-congratulatory back-patting Hollywood’s been doing over ‘Wonder Woman’ has been so misguided,” Cameron said. “She’s an objectified icon, and it’s just male Hollywood doing the same old thing! I’m not saying I didn’t like the movie, but to me, it’s a step backwards.”

The Oscar-winning director went on to praise one of his own strong female character, Sarah Connor from “Terminator.”

Also Read: Patty Jenkins Fires Back at James Cameron Over His 'Inability to Understand' Wonder Woman

He doubled down on his critique about the DC Comics film starring Gal Gadot and Chris Pine earlier this week in an interview with The Hollywood Reporter, in which he commented on Wonder Woman’s “form-fitting” costume and how “drop-dead gorgeous” Gadot is.

“She was Miss Israel, and she was wearing a kind of bustier costume that was very form-fitting,” he said. “She’s absolutely drop-dead gorgeous. To me, that’s not breaking ground. They had Raquel Welch doing stuff like that in the ’60s. It was all in a context of talking about why Sarah Connor — what Linda created in 1991 — was, if not ahead of its time, at least a breakthrough in its time. I don’t think it was really ahead of its time because we’re still not [giving women these types of roles].”

When Cameron first voiced his criticism of the film that has grossed $820 million globally, Jenkins fired back about Cameron’s “inability to understand What Wonder is.”