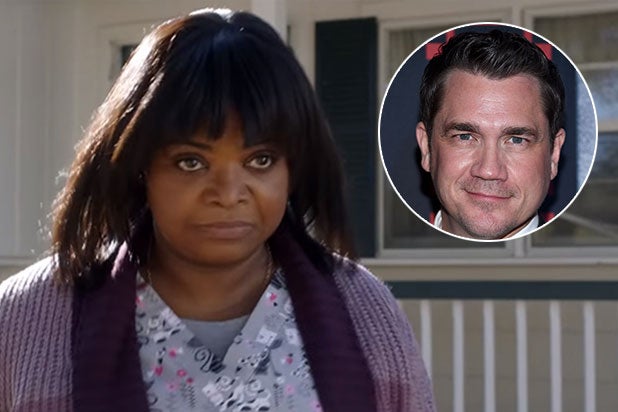 [Spoiler alert: Do not read on if you haven’t seen “Ma.”]

Octavia Spencer does some crazy, crazy stuff in “Ma,” from locking up teenagers to sewing their mouths shut. The actress was game for a lot, director Tate Taylor tells TheWrap, but was scared of shooting one particular scene in the horror movie.

“She was so game, her favorite guilty pleasure in real life is watching murder TV and forensic shows — she loves it,” Taylor said. “The only thing she wasn’t excited about was that huge explosion in the basement — that was real and it was scary.”

To calm Spencer down, Taylor said, a “really handsome” special effects guy gave her a big hug and told her: “Look me in the eye — we’ve got this.” In fact, the scene was incredibly difficult to shoot because they just had one day to shoot it.

Spencer plays Ma, a veterinary assistant living in a small town with not much to do. She comes across a group of teenagers who just want to drink and have a good time, so she gives up her basement for them to do it safely. Soon, things turn sinister, and the teenagers start to fear for their life.

“I wanted to freak everyone out,” Taylor said. “I wish it was three hours long because I had so many crazy ideas!”

It turns out Ma had suffered some trauma in that town in the past — the kids in her school bullied and tormented her, which never really left Ma — so she seeks revenge. There’s no supernatural explanation for her behavior — Taylor really wanted to focus on how mental health and trauma can affect us years down the line.

“She suffered horrible trauma and abuse, and this is a reaction to that abuse. I want people to look at that trauma and mental illness and how we treat people and what we can do,” he explained. “When the script came to me, there was no backstory for Ma. I said, ‘If I’m going to do this, it can’t be the crazy woman doing this to kids.’ I wanted to understand why she is like that and you want to establish empathy for your villain. I brought that to the story. Bringing the supernatural into it is not how I tell stories — it’s too easy.”

Spencer and Taylor had previously worked together on “The Help” and “Get On Up,” so it was easy for Taylor to see Spencer in his most recent film. Also, they are very close, and Taylor knew Spencer was ready to try something new.

“She’s my best friend, we talk every day,” Taylor said of Spencer. “I was about to go meet with Blumhouse, and she told me she was sick of doing the same thing over and over again, and that as a woman of color, you don’t get offered the cool, weird stuff. A month later, I was at Blumhouse and they presented the script to me — but it was written for a white woman. I thought, ‘Nah, this should be Octavia.'”

He added: “There’s a group of people that I love and it’s easier when you know someone’s skills and if they are cool, you want to work with them.”

That’s true of his other frequent collaborator, Jessica Chastain, with whom he also worked on “The Help.” Recently, Taylor signed on to direct Chastain’s “Eve” after director Matthew Newton exited the project following online backlash due to his history of being accused of assault and domestic violence.

“I’m all about friendship and loyalty, and I had a real friend who had a movie which was about to fall apart,” Taylor said of “Eve.” “When you’re making a movie, it’s not just about the studio and the actors — there are a lot of people on the crew, and this is their livelihood. It has an effect on people and Jessica was my friend and she said, ‘I need help.’ I came on three weeks before we started shooting.”

After “Eve,” Taylor will direct “George and Tammy,” also starring Chastain, as well as “Breaking News in Yuba County,” which will star Awkwafina, Mila Kunis and Allison Janney. Taylor’s other directing credits include “The Girl on the Train” and “Pretty Ugly People,” and he’s acted in films like “Winter’s Bone” and “Romy and Michele’s High School Reunion.”