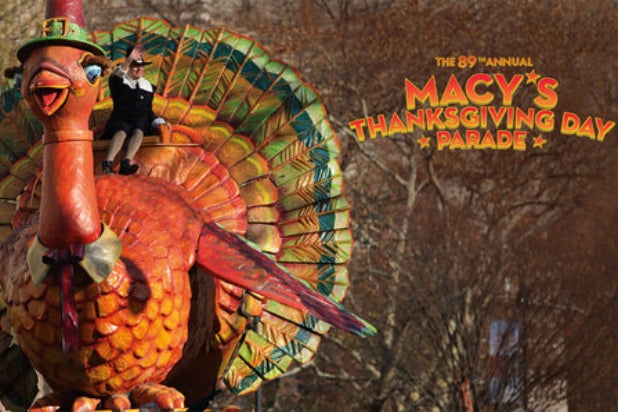 Viewers gobble-gobbled up the “Macy’s Thanksgiving Day Parade” on Thursday morning: The NBC tradition scored broadcast’s top rating of the fall season across all entertainment offerings — so, not counting news or sports.

The turkey-day parade earned a 12.6 household rating/27 share across Nielsen’s 56 metered markets. Based on that metric, the parade was down just 1 percent versus 2014.

It was up 1 percent in the all-important 18-49 demographic, however, and reached the second-best Macy’s parade number in a dozen years. From 9 a.m. – noon, the 89th annual “Macy’s Thanksgiving Day Parade,” hosted by Matt Lauer, Savannah Guthrie and Al Roker of NBC’s “Today,” averaged a 7.0/30 among that age range in the 25 markets with local people meters.

Had Justin Bieber not bailed on a parade performance last minute, all of those figures may have been even better.

Over the next two hours, NBC’s coverage of “The National Dog Show Presented by Purina,” hosted by John O’Hurley and featuring the commentary of analyst David Frei, received a 5.8/13 in metered-market households and a 3.0/12 among viewers 18-49 in the local people meters.

That latter figure is up 15 percent from last year, reaching the highest rating ever for the “National Dog Show” in the 13 years NBC has tracked it that way.

The metered-marketed number is up 2 percent from last year, and is the second-highest rating for the competition in 11 years.