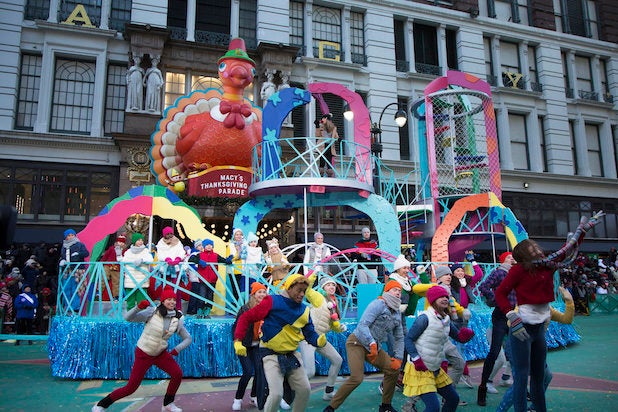 Even so, the parade was (again) the top entertainment show on television since the Oscars. And here’s an interesting tidbit: 2018 marked the first year in the history of Nielsen people meters that the Macy’s Parade (5.98 rating) out-rated the Grammys (5.96 rating) among the advertiser-coveted adults 18-49 demographic.

The parade also bested Music’s Biggest Night in total viewers (22.3 million vs. 19.0 million), marking the first time in nine years that the two big TV specials ranked in that order.

This year’s march toward Herald Square was also the No. 3 entertainment telecast for the entire calendar year of 2018 to date, coming in just behind ABC’s telecast of the Academy Awards and the post-Super Bowl telecast of “This Is Us” (also on NBC).

Following the parade, NBC’s telecast of “The National Dog Show Presented by Purina” scored 11.2 million total viewers and a 2.70 demo rating, for its third-best score in viewers and fourth-best in the demo in the 17 years the network has televised the event.

See the rankings for the year-to-date top entertainment telecasts below, in both the demo and total viewers, according to Live + Same Day data from Nielsen.

2018 Holiday TV Specials: Here Are 20 Programs Sure to Make Your Days Merry and Bright (Photos)

With Thanksgiving behind us, you are now officially allowed to start listening to "All I Want for Christmas Is You" (if you haven't been since Nov. 1), baking cookies, decorating the tree and -- most importantly -- tuning into all those holiday specials you look forward to throughout the less festive times of year. TheWrap has rounded up all the ones you can't miss this season. Click through our gallery to check out the list.

Also Read: 27 Shows You Can Binge Watch Over the Thanksgiving Holiday (Photos)