Don Draper doesn’t mind calling a woman a doll. Now, he is one.

AMC and Mattel Wednesday announced plans to launch a "Mad Men" series of Barbie dolls featuring four characters from the drama. Don and Betty Draper, Roger Sterling and Joan Hathaway will all be immortalized in the porcelain-like Silkstone.

"Each doll is stylized in iconic costumes from the series, and comes with accessories true to their show counterparts," Mattel promises. "Don Draper wears his classic, polished red-lined suit and comes accessorized with a hat, overcoat and brief case; Betty Draper’s classic look is captured with unparalleled detail, from her faux pearl necklace to her pumps; Joan Holloway looks chic in a purple skirt suit and perfectly styled coif with her staple accessory – a pen necklace; and Roger Sterling is looking dapper in his monogrammed shirt."

Sketch drawings of the dolls will be included in the DVD release of "Mad Men Season Three" (dropping March 23). The dolls themselves go on sale in July for a suggested retail price of $74.95.

Here’s how the foursome look: 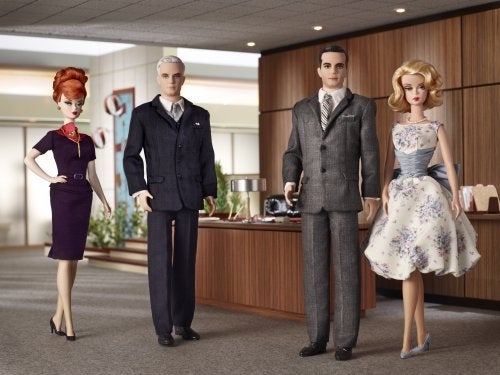