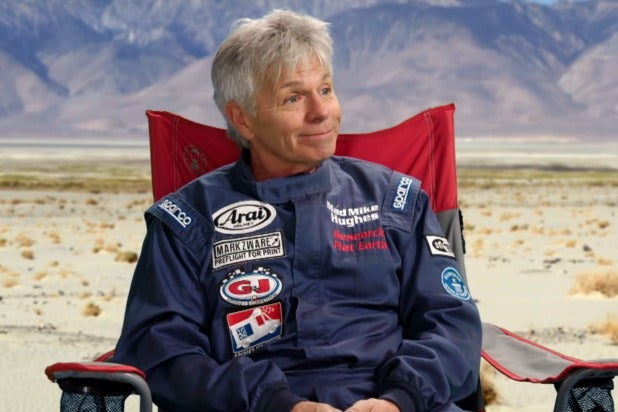 Daredevil “Mad” Mike Hughes died on Saturday after crashing his rocket while filming the new series “Homemade Astronauts” for Science Channel. He was 64.

“Our thoughts and prayers go out to Mike Hughes’ family and friends during this difficult time,” a Science Channel spokesperson said in a statement. “It was always his dream to do this launch, and Science Channel was there to chronicle his journey.”

Hughes and teammate Waldo Stakes were “working on a manned rocket to space, designing a ‘Rock-oon’ — part rocket, part balloon — that they hope to use to get Mike to the Karman line, the border between Earth’s atmosphere and outer space at about 62 miles high,” according to Science Channel’s series description. “To raise money and awareness for that pricey venture, they plan to first launch Mike 5,000 feet high in a steam-powered rocket.”

This was that attempt.

“Homemade Astronauts” is also following two other self-financed teams, led by fellow amateur rocketmen Ky Michaelson and Cameron Smith. Michaelson is the first civilian to build and launch an unmanned rocket into space. Smith planned to take a hot air balloon up to 60,000 feet to test out his new spacesuit.

“Homemade Astronauts” was first announced in July 2019 for a 2020 premiere.

“As we celebrate the 50th anniversary of the moon landing, ‘Homemade Astronauts’ looks at a group of ambitious individuals who are carrying on in the American tradition of finding their own way and making their dreams come true with old-fashioned grit and self-determination,” Marc Etkind, general manager of Science Channel, said at the time.

Etkind has since left the company.

“Homemade Astronauts” is being produced by World of Wonder. Executive producers for World of Wonder are Jeremy Simmons, Fenton Bailey, Randy Barbato and Tom Campbell.