HBO Max has renewed its Cristin Milioti-led comedy “Made for Love” for Season 2, the streaming service announced Monday.

The dark comedy, which debuted in April, tells the story of a woman on the run who discovers that her husband, a controlling tech billionaire, has implanted a monitoring device – the Made for Love chip – in her brain.

Alissa Nutting, the author of the source novel, served as executive producer on the first season and has been upped to co-showrunner on Season 2. She will work alongside Season 1 boss Christina Lee. 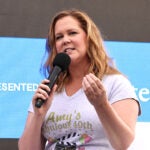 “MADE FOR LOVE is funny, dark, and entirely unique,” said Suzanna Makkos, EVP, Original Comedy and Adult Animation, HBO Max. “We are thrilled to be reuniting with this dream team of talented producers, incredible cast, and CGI dolphins to tell the next chapter of this exciting story.”

“We’re thrilled we get the chance to work with our incredible cast and crew again. We would’ve announced the pick-up earlier, but it was a beast closing Diane’s deal. Everyone thinks she’s a doll but she’s a real hard-ass,” Lee and Nutting added.