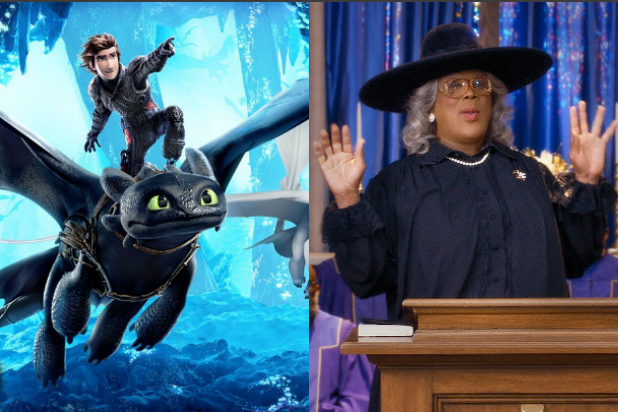 It’s a battle between Tyler Perry and Toothless this weekend, as Lionsgate’s “A Madea Family Funeral” and Universal/DreamWorks Animation’s “How to Train Your Dragon: The Hidden World” are neck-and-neck for the top spot at the box office, with both films estimated to make $25 million.

Trackers had estimated an opening of $18-20 million for “Madea Family Funeral,” which would have been one of the lowest openings ever for a “Madea” film. Instead, the final film in Tyler Perry’s comedy series is now looking like it will make an estimated $25.3 million, improving on the $21.2 million made by the last installment in the series, “Boo 2! A Madea Halloween.”

“Funeral” made $9.2 million on Friday from 2,442 screens on Friday, as critics and audiences were once again distant in their reaction to the film. While critics gave it a 33 percent Rotten Tomatoes score, hardcore Tyler Perry fans that made up the film’s opening night audience gave it an A-.

“How to Train Your Dragon 3” is looking at a solid hold of $25.6 million, currently giving it a narrow lead over “Madea” for the No. 1 spot. That figure would signal a 53 percent drop from its $52.5 million opening and is consistent with second weekend totals for past films in the DreamWorks Animation trilogy. The 10-day total is now estimated at $93.2 million.

In third is Fox’s “Alita: Battle Angel,” which is estimated to make $6.7 million in its third weekend for a $93.2 million total. In China, the sci-fi film is proving to be as front-loaded at the box office as it has been in the rest of the world, as it is estimated to drop 62 percent from its opening weekend for a $24 million second weekend total.

WB’s “Lego Movie 2” is in fourth with $5.7 million in its fourth weekend for a $90 million running total, while Focus’ “Greta” completes the top five with a lower-than expected $4.7 million opening from 2,411 screens. The Chloe Moretz/Isabelle Huppert thriller was projected for a $6 million start, but has had tepid reception with a C+ on CinemaScore and a 58 percent Rotten Tomatoes score.

“Greta” might even concede its top five spot to newly-minted Best Picture Oscar winner “Green Book,” which has returned to 2,641 screens and is estimated to make $4.5 million this weekend. “Green Book” has been an incredibly leggy film since its $5.5 million opening back in November, never grossing less than $1 million in a single weekend as it reaches a domestic total of $75 million after Oscar Sunday.