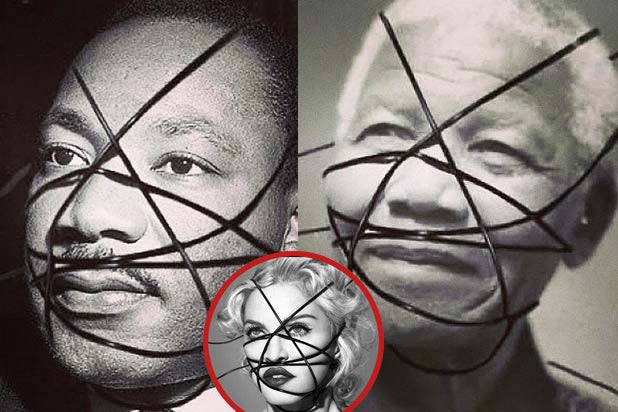 Madonna has apologized for publishing controversial images of civil rights leaders and cultural icons wrapped in black nylon, which she says fans made to show support for her new album “Rebel Heart.”

“I’m sorry,” she wrote Friday night on Facebook. “I’m not comparing my self (sic) to anyone. I’m admiring and acknowledging there (sic) Rebel Hearts.”

Three historical figures given the rebel heart treatment on her Twitter account Friday were Martin Luther King Jr., Nelson Mandela and Bob Marley. This prompted a flurry of negative responses from her social media followers.

“Very disrespectful,” “Wtf,” “delete this” and just plain “no” were among the comments in a long list of Twitter users chiming in with an opinion on the 56-year-old singer’s tweet featuring King, who is the subject of Golden Globes contender “Selma.”

But Madonna doesn’t think anyone should feel insulted.

“I also did it with Michael [Jackson] and [Frida Kahlo] and [Marilyn Monroe],” she wrote in her typo-laden Facebook apology. “Am I saying I am them? NO. I’m saying they are Rebel Hearts too.”

Since posting her apology, the singer has gone on to share more Rebel Heart–affected pictures, including one of Princess Diana and the artist Jean-Michel Basquiat.

Madonna has been teasing “Rebel Heart” with controversial social media messages and images since the Dec. 19 release of six tracks from the album, which will be available in full in March.

Also Read: Madonna’s Nude Photo Has Women of ‘The View’ Wishing They Could Pose Naked Too (Video)

“I’m sorry
I’m not comparing my self to anyone
I’m admiring and acknowledging there Rebel Hearts
This is niether a crime or an insult or racist!
I also did it with Michael jaclson and frida khalo and marilyn monroe
Am I saying I am them
NO
I’m saying they are Rebel Hearts too.
And
I didn’t do it
My fans did
And I just re posted those photos
My fans aren’t racist either
If they put me in the same category as these other people
Thank you. I’m very flattered and I hope one day to live up to 1 100th of what those people accomplished.” – Madonna