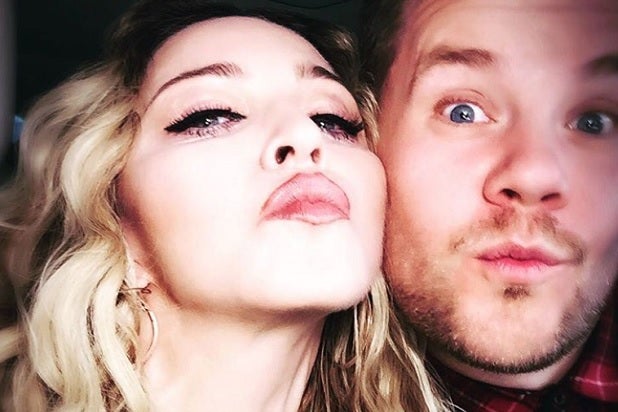 Looks like Madonna and James Corden are making some beautiful — or at least amusing — music together.

The “Like a Virgin” singer and the “Late Late Show” host signaled that the Material Mom will make an appearance on Corden’s popular “Carpool Karaoke” segment Wednesday.

“Riding around Manhattan with this Hunk of Burning Love @latelateshow carpool karaoke,” Madonna posted on Instagram, along with a photo of herself and Corden posing cheek-to-cheek.

As to what material the pair might duet on, the “The Late Late Show’s” Instagram account posted the same photo and message — along with the addition of “praying hands” emoticons.

So … “Like a Prayer,” maybe? Or perhaps Corden is just praying that his pipes can match up to those of his partner.

And perhaps we can presume from Madonna’s caption that the pair take on the Elvis catalog.

A spokeswoman for CBS told TheWrap on Wednesday that an air date for the segment has not yet been slated.

What songs do you think/hope Madonna and Corden will tackle? Share your thoughts in the comments section.