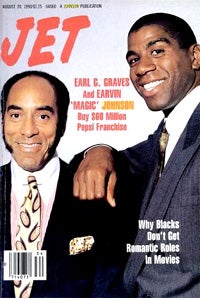 Magic is dropping his bid for Johnson.

Earvin “Magic Johnson, the retired NBA star and chairman of Magic Johnson Industries, says that his company is dropping its bid to buy Ebony and Jet magazines owner Johnson Publishing.

"I would like to salute Linda Johnson Rice and the Johnson family for pioneering the iconic brand of the Johnson Publishing Company, which we have all come to love and respect. Ebony and Jet have been permanent fixtures on coffee tables in African-American homes for many years. Recently, an affiliate of Magic Johnson Enterprises and Johnson Publishing Company were in advanced discussions to do business together, but unfortunately we were unable to reach a definitive agreement. We will continue to look for opportunities to invest in African-American media."

Johnson did not immediately return a request for additional comment, but I’ll update this post if I hear back.

Magic would have been buying a pair of struggling magazines. Ad pages for Ebony plummeted 38.9 percent in 2009, according to the Publishers Information Bureau. Jet pages fell 35.5 percent.

Turning those titles around really would’ve been pure magic.

For its part, Johnson Publishing told Folio it is continuing to explore a “wide range” of strategic options that could include a sale.