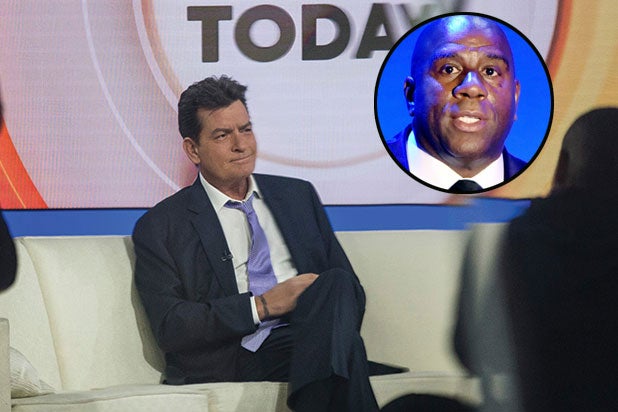 Charlie Sheen has had an outpouring of support since he publicly announced Tuesday that he was diagnosed as HIV positive four years ago, and now Magic Johnson has reached out to the actor via Twitter.

“I wish @CharlieSheen and his family the best. With the advancement in treatments and medicine he can fight this disease and live a long life,” the NBA star said in a heartfelt Twitter Tuesday afternoon.

The Los Angeles Lakers legend, whose real name is Earvin Johnson Jr., revealed that he had tested positive for HIV in November 1991 and immediately retired from the NBA — but went on to play in the All-Star game and the 1992 Summer Olympics.

The NBA star later created the Magic Johnson Foundation to help combat HIV and has been active in the fight against the disease ever since.

Johnson has stated that his aim is to “help educate all people about what [HIV] is about” and teach others not to “discriminate against people who have HIV and AIDS.”

Johnson has now invited Sheen to help him in his fight for awareness.

“In @CharlieSheen breaking his silence, I hope he joins me in educating the world about HIV/AIDs,” he wrote in a follow up tweet.

As for notorious Hollywood playboy Sheen, the 50-year-old sitcom star said in an interview with Matt Lauer on NBC’s “Today” on Tuesday that HIV is a “hard three letters to absorb … It’s a turning point in one’s life.”

Sheen’s marriage to Brooke Mueller ended in 2011, the same year as his diagnosis as well as a very public meltdown that led to his departure from the hit CBS sitcom “Two and a Half Men.” On Tuesday, he said his diagnosis led to a downward spiral in his attitude and behavior.

“I was so depressed by the position I was in,” he said. “I was doing a lot of drugs, I was drinking way too much and I was making really bad decisions.”

Coming forward, the actor said, has removed the stigma he had previously attached to his HIV status.

“I have a responsibility now to better myself and to help a lot of other people, and hopefully with what we’re doing today, others may come forward sand say, ‘Thanks, Charlie. Thanks for kicking the door open,'” he vowed.

I wish @CharlieSheen and his family the best. With the advancement in treatments and medicine he can fight this disease and live a long life

In @CharlieSheen breaking his silence, I hope he joins me in educating the world about HIV/AIDs.