Netflix has finally revealed the first voice cast member for its upcoming animated “Magic: The Gathering” TV series, setting “Superman Returns” star Brandon Routh as the voice of Gideon Jura, an “unfalteringly heroic Planeswalker” on the show, which is set to debut in late 2022.

Though Routh is the only voice star to be revealed so far, Wizards of the Coast says “the animated series is currently in full production: all scripts for the first season are written, recorded, and becoming real.”

The announcement came Tuesday, a few days after the reveal that original executive producers Joe and Anthony Russo had exited the series and handed creative control over to new executive producer Jeff Kline (“Transformers: Prime”) and co-executive producer and story editor Steve Melching (“Star Wars: The Clone Wars”), during “Magic: The Gathering” publisher Wizards of the Coast’s Magic Showcase 2021 live stream. This presentation also included a first look at the TV series’ character art and sculpt for Gideon, which you can view at the bottom of this post. 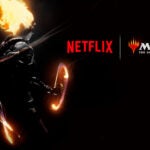 Per Wizards of the Coast’s description, “While the series brings together familiar and well-loved Planeswalkers for Magic fans, it also introduces new characters and kicks off a completely new story, so anyone — even if they’ve never played Magic before — will enjoy the story from episode one.”

Additionally, the Hasbro-owned Wizards of the Coast revealed it will be releasing a new “MTG” book, in conjunction with the first season of the Netflix series. The book will be written by fantasy author Django Wexler and serve as a “fast-follow prequel” to the show.

“The novel is set to release alongside the launch of the Netflix series, and it follows Planeswalkers Gideon Jura and Jace Beleren adventuring together as they right wrongs across the multiverse,” according to Wizards of the Coast. “But with very different insights into what they witness, it is safe to say that the planeswalking partnership is under quite a bit of strain.”

The “Magic: The Gathering” TV series is produced for Netflix by Entertainment One, the studio owned by Wizards of the Coast parent company Hasbro.

See the character art and sculpt for Routh’s Gideon below.