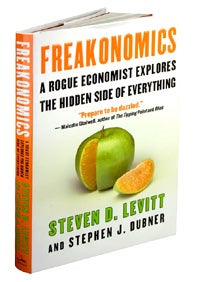 Magnolia Pictures announced on Monday that it has acquired the North American rights to "Freakonomics," the film version of Steven Levitt and Stephen Dubner’s bestselling book.

Terms of the deal were not disclosed. According to Dan O’Meara, one of "Freakonomics" producers, the film cost about $3 million to produce.

"Freakonomics" features a number of big-name documentary filmmakers taking turns in the director’s chair: Alex Gibney (“Enron: The Smartest Guys in the Room”) takes a "visually arresting look at the crumbling facade of Sumo wrestling and exposes searing and violent truths about this ancient and revered sport"; Morgan Spurlock ("Super Size Me") "offers up a buoyant and revealing angle on the repercussions of baby names"; Rachel Grady and Heidi Ewing ("Jesus Camp") "balance levity and candor with an eye-opening profile of underachieving kids incentivized to learn with cold hard cash"; Eugene Jarecki ("Why We Fight") "investigates an unsettling theory to explain why crime rates dramatically dropped in the early ’90s"; and Seth Gordon ("King of Kong") "weaves the pieces together with brisk interludes, providing context and commentary from the authors."

The film is also scheduled to close the upcoming Tribeca Film Festival.