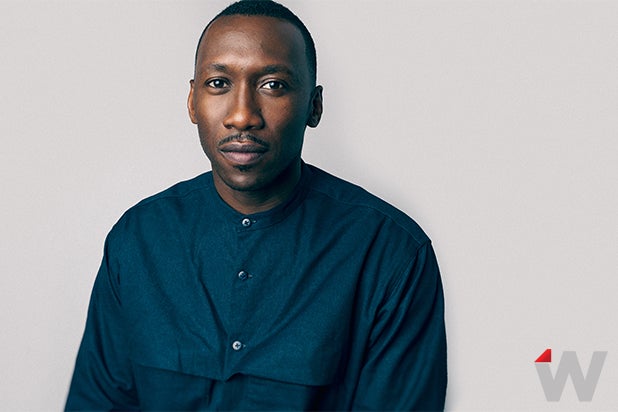 Fresh off his second Oscar win for “Green Book,” Mahershala Ali has found his next starring role, a sci-fi drama called “Sovereign,”

Marc Munden will direct based on a screenplay by “A Quiet Place” writers Scott Beck and Bryan Woods. Greg Weidman and Geoff Tock wrote an original draft of the script, with revisions by Jack Thorne (“Harry Potter and the Cursed Child”).

The plot for “Sovereign” is currently being kept under wraps, but producers compare the project to Denis Villeneuve’s “Arrival.”

Entertainment One (eOne) will produce the film alongside 21 Laps Entertainment’s Shawn Levy, Dan Levine and Dan Cohen, who are behind Netflix’s “Stranger Things.” eOne will also finance.

“Much like our film ‘Arrival,’ this project is for us a dream pairing of an inspired screenplay with a truly visionary director,” Levy, Levine and Cohen said in a joint statement. “Marc Munden has been an exceptional collaborator in shaping this singular story into one that jumps off the page and with the phenomenally talented Mahershala Ali at the heart of this film, we feel we now have the dream creative partners to tell a story that audiences won’t forget.”

“We have long loved this project and have been patiently waiting until we found the right leading actor, which we no doubt have found in the incredibly talented Mahershala Ali,” Nick Meyer, eOne’s president of film said in a statement. “The cast is clearly shaping up well and is backed by a creative team with a proven track record and the ability to tell a story that will resonate with audiences around the world.”

In addition to his Best Supporting Actor Oscar for “Green Book,” Ali also stars on the latest season of “True Detective” and in “Spider-Man: Into the Spider-Verse.”

Munden is known for his work on the Hulu mini-series “National Treasure,” the sci-fi series “Utopia” and the Amazon series “Electric Dreams.” He most recently directed “The Secret Garden” for HeyDay Films and Studio Canal, which is currently in post-production.

Beck and Woods most recently wrote the screenplay for “A Quiet Place.” Weidman and Tock’s recent credits include the TV series “Zoo” and “Limitless.” And Thorne wrote the play “Harry Potter and the Cursed Child” as well as the films “Wonder” and “The Secret Garden.”