Elliott Management Corporation, which said that it now manages $3.2 billion worth of AT&T shares, wrote a lengthy letter to the telecom and media giant’s board of directors on Monday outlining what Elliott called AT&T’s “long-term underperformance.”

“AT&T’s shareholder returns have been disappointing over a prolonged period,” the investor wrote. The letter pointed to acquisitions that haven’t panned out, missed opportunities, operational inefficiencies and AT&T’s “poor execution in wireless.”

Signed by partner Jesse Cohn and Elliott’s Associate Portfolio Manager Marc Steinberg, the detailed memo called out the telecom company for its poor performance in wireless and what they believe are bad purchases of non-core assets, namely DirecTV, that have dragged down the overall business.

In a statement later on Monday, AT&T responded: “Our management team and Board of Directors maintain a regular and open dialogue with shareholders and will review Elliott Management’s perspectives in the context of the company’s business strategy. We look forward to engaging with Elliott. Indeed, many of the actions outlined are ones we are already executing today.”

The company also defended its current strategy. “AT&T’s Board and management team firmly believe that the focused and successful execution of our strategy is the best path forward to create value for shareholders,” the statement continued. “This strategy is driven by the unique portfolio of valuable businesses we’ve assembled across communications networks and media and entertainment, and as Elliott points out, is the foundation for significant value creation. We believe growing and investing in these businesses is the best path forward for our company and our shareholders.”

In the letter, Elliott went particularly hard against AT&T’s 2014 purchase of satellite TV provider DirecTV and argued that AT&T bought a declining asset. “The pay TV ecosystem has been under immense pressure since the deal closed,” the letter read. “Unfortunately, it has become clear that AT&T acquired DirecTV at the absolute peak of the linear TV market.”

Elliot added that the company’s streaming TV bundle, AT&T Now (originally launched as DirecTV Now) has been a failure, pointing out subscriber losses in the last three quarters. The streaming service had 1.9 million in the third quarter of 2018, but is now at 1.3 million as of Q2 in 2019.

Additionally, Elliot criticized the rollout of WarnerMedia’s upcoming streaming service HBO Max. Last year, AT&T CEO Randall Stephenson said the streaming service would feature a three-tiered pricing structure, but that plan was scrapped in favor of a service centered on HBO. “This quick reversal has intensified the skepticism around WarnerMedia, its OTT strategy and the management of the business itself,” the letter said.

The full 23-page letter from Elliott to AT&T can be found here.

The memo seemed to have an immediate impact on AT&T’s stock price, as shares rose more than 5% in pre-market trading, to $37.92. That’s a big hike for the relatively inexpensive stock, which Elliott believes could be as high as $60 per share — or more — by the end of 2021. The stock uptick cooled off a hair when U.S. stock markets officially opened at 9:30 a.m. ET. See the movement below. We chose a five-day snapshot to best depict this morning’s increase. AT&T stock (T) closed Friday at $36.25 per share. The company’s current market cap is just under $265 billion. 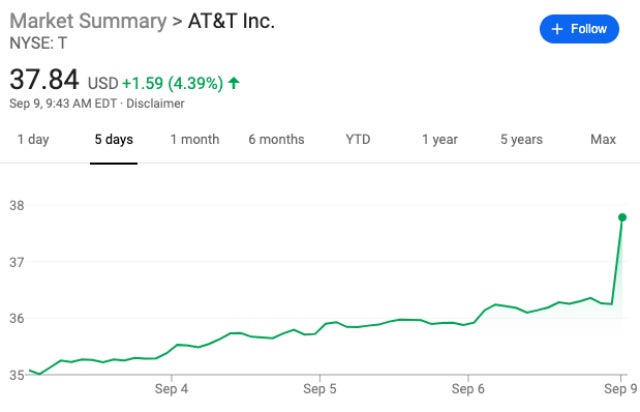 Elliott has been buying up AT&T shares over time, a person with knowledge of its investment told TheWrap. Now that the accumulation is “significant,” the activist investor decided to go public with the letter outlining the case for change, the person said.