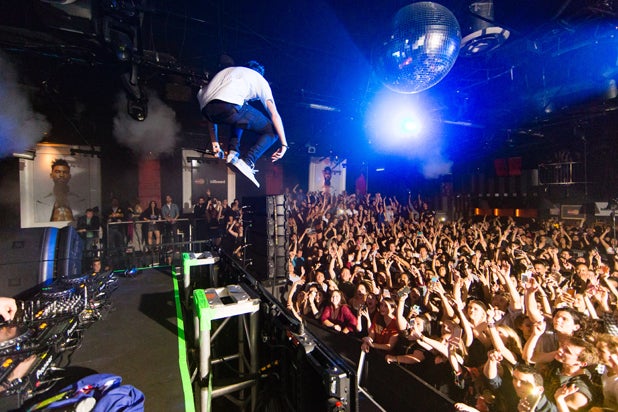 HOLLYWOOD, CA - FEBRUARY 10: Andrew Taggart and Alex Pall of The Chainsmokers perform onstage as MasterCard And Billboard present The Chainsmokers and Miguel live in concert at Create on February 10, 2016 in Hollywood, California. (Photo by Christopher Polk/Getty Images for MasterCard)

The major music streaming platforms and tech companies, including Amazon Music, Facebook, SiriusXM, Pandora, Spotify, TIDAL and YouTube Music, have all agreed to contribute millions of dollars to the COVID-19 Relief Fund to benefit out of work musicians and music industry professionals affected by the coronavirus, it was announced Tuesday.

The fund was established by The Recording Academy through its charitable arm MusiCares, which launched last week with a $2 million commitment that would go to aid artists, production technicians and more freelance, gig economy music professionals who were impacted  by the loss of income due to live music event cancellations.

While no exact figures were given, MusiCares and the Recording Academy say that millions more than the initial $2 million have been donated by the participating music distributors.

“The music community is in great need so The Recording Academy greatly appreciates the collective support and emergency aid that this coalition of music industry and tech leaders has provided,” Recording Academy interim president and CEO Harvey Mason Jr. said in a statement. “We hope these partnerships inspire other organizations to stand behind the music community in this time of great uncertainty. We continue to encourage our peers to embrace the collaborative power of music and to support impacted industry professionals in both trying and good times.”

All the Recording Academy chapters have also committed to fundraising within their local communities, and Mason also sent a letter to Congress calling on the government to include the music industry in any relief package.

If you wish to support our efforts to assist music professionals in need, visit here, or if you are a member of the music industry in need of assistance, visit: musicares.org.