Even the most accomplished, brilliant screenplays are, by definition, unfinished works, as they require a director’s vision to be made whole. Consequently, what you are writing is a written document first, which, God willing, will find its way into the hands of enthusiastic P.W.M.s (People With Money).

You, as the screenwriter, must find a way not only to tell a story, but also to present that story in an engaging narrative style from page one.

You must develop your voice and attitude as off-screen narrator to lead your reader by the hand through the entire script.

Without mentioning the camera or using any other cinematographic language, find a way to “direct” your movie on the page. Your goal is to make your incomplete movie a complete, satisfying read. Excise all unnecessary verbiage; save your purple prose for that novel you keep meaning to write.

Brevity is the soul of wit — and the art and craft of screenwriting; keep it lean and mean.

Film is a visual medium, so a good rule of thumb for screenwriters is: If an audience can’t see it or hear it, don’t write it.

Remember, you’re catering to readers (producers, development executives, agents, managers) who take home piles of scripts every weekend. Once you have their eyes on page 1, don’t lose them with a dull, flat, predictable style. Yes, the story must absolutely rivet them. But so must the manner in which you tell the story.

Never underestimate the value of the entertaining read. If they get bored, it’s your fault, not theirs.

By now, everybody has read all the screenwriting books and knows just what to expect in terms of “inciting incidents,” “plot points,” “midpoints” and all that structural jazz.

As a result, screenplays have become formulaic, structurally predictable and mechanical. You might say, “Your plot points are showing.”

Structure needs to be seamless, invisible. You need to defy your readers’ expectations of What Happens Next, both plot-wise and structure-wise.

What this means is, your plot points must unfold in new and surprising ways.

Readers crave neatness, symmetry, the tying up of loose ends. Never give them what they want.

Guide your readers through your plot by constantly dangling a carrot in front of their faces. Each scene must present unfinished business that cries out to be completed — but isn’t. End your scenes on discordant notes, so your reader is compelled to turn the page and read the scene after it, and the scene after that.

Readers yearn for resolution, order. Life is about compromise, mystery, wonder, constant change. If you give your readers tidy, ordered structure, they’ll be disappointed because it won’t feel organic.

Life is messy and unpredictable. You must structure your stories to create the feeling that virtually anything could happen next.

Your readers will not be comfortable with this approach — which is exactly your intent. When we feel too comfortable, we get restless and bored. We want to be surprised and even shocked by movies, or we may as well stay at home in our Barcaloungers and be remote control zombies.

How do you keep your story structurally surprising? By focusing on your characters’ relationships to structure. Your “plot points” emerge as crises for your characters because they force your characters to change, and while each crisis presented in your screenplay should be surprising, your characters’ unique and very specific approach to crisis management is what keeps your reader hooked — not the crisis itself.

3. DIG AS DEEPLY INTO YOUR CHARACTERS AS POSSIBLE, THEN GO DEEPER.

Shallow people are boring and don’t deserve to have movies written about them.

You’ll need to do a character autopsy. Really roll up your sleeves and get in touch with what makes your characters tick at their core.

– Does my protagonist’s character contain a CORE CONTRADICTION? 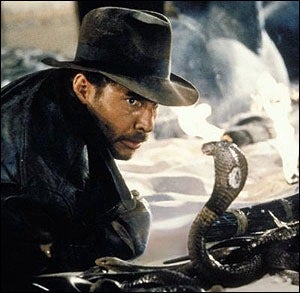 Indelibly memorable, iconic characters are always flawed, walking paradoxes. Scarlett O’Hara is both tough and vulnerable, staunchly independent and needy. Hannibal Lecter is both destructive and instructive, monster and mentor. The Woody Allen archetype is both nerdy schlub and sexual dynamo, whip-smart and self-destructively neurotic. Indiana Jones is both brave adventurer and bowtied academic who’s afraid of snakes.

It’s these kinds of contradictions that magnetically draw us in. Enigmatic characters are puzzles that need to be solved along with the central mystery of the plot (another essential ingredient to a successful screenplay).

– How are my characters DESPERATE?

Character desperation is a double-edged sword. That is, your characters (like most human beings) are terrified of change. They’d rather live their lives of quiet desperation than make a change. No matter how unfulfilled, most people would rather live the illusion of “happiness” than pursue their dreams. No matter how miserable, most people are desperate to keep things As They Are.

On the other hand, your characters also are desperate to rid themselves of their guilt, wounds, clutter, rigidity, fears.

Both diametrically opposed forms of Desperation must (and will) come to the forefront in the course of your screenplay. This will generate inner turmoil that will provide your characters with more than just one level of conflict in any given scene. Ah, drama.

– How are my characters ingenious RISK TAKERS?

Desperation will (hopefully) lead your characters to find an active way out of a crisis. It requires them to become proactive — which is good.

Better yet, be sure to limit their choices. These limited choices stem only partially from the external circumstances; an equally important component to your characters’ limited choices is mandated by who they are.

As in life, there are often an infinite number of choices that can be made at any given time — but it’s who we are that dictates which of those choices are available to us. Character backstory has everything to do with who, what, when, where and why your characters do everything, plot-wise.

If you can’t credibly justify how to get your character to, say, plot point two — don’t force it! Ask yourself how your unique, specific character’s ingenuity might organically unfold to lead him to your plot point.

When you know your characters inside and out, you probably won’t be so confounded by all the choices you have to make as a writer. You’ll know where you want to take them, but due to their uniqueness, you’ll only be able to get them there in a way that’s unique and specific to them.

– How do my characters find EMOTIONAL RELEASE?

In Depth of Character terms, “release” is about healing, which occurs via the release of the “old self” (that was desperately afraid to change) and the emergence of the New Self. When this New Self emerges, your characters have learned to accept the external circumstances of their lives because they’ve learned to accept themselves. This is the escape from all the clutter and uncertainty of the illusion that had given rise to the old, desperate self.

Incidentally, this so-called “New Self” was there all along, but hidden under a self-imposed cloud of illusions and clutter. Blinded by fear. The New Self that emerges is by no means perfect or fearless, but is definitely stronger and (finally) able to see the world more clearly — for better or worse. Often this will give rise to a whole new perspective on life, or, perhaps, simply a new appreciation of the old perspective.

4. TAKE THE TIME TO LET THE DETAILS ACCUMULATE.

Find ways to crystallize behavior so it’s succinct, visual, specific. The best exposition, a) doesn’t read like exposition; b) is economical.

The better you know your characters, the fewer pages it will take you to convey them to your reader.

It’s in the small details. Expressing these details on the page isn’t about quantity; it’s about choosing which details to show that will most efficiently get your readers under a character’s skin.

Once your readers understand what makes your characters tick on a deep, existential level, they may just follow them anywhere. They’ll be hooked.

Neil’s film and television credits include the cult teen comedy "Don't Tell Mom the Babysitter's Dead” and the new 3D animated feature “Tad, the Lost Explorer,” on which he served as co-writer and co-executive producer. He is currently working on the sequel, as well as on a new animated movie for the same director.

Landau is now working on a new book for Focal Press entitled "The Showrunner’s Roadmap" – on the art and craft of creating, writing, and sustaining episodic TV series – which also includes interviews with today’s top TV showrunners.

Neil’s film and television credits include the cult teen comedy "Don't Tell Mom the Babysitter's Dead” and the new 3D animated feature “Tad, the Lost Explorer,” on which he served as co-writer and co-executive producer. He is currently working on the sequel, as well as on a new animated movie for the same director.

Landau is now working on a new book for Focal Press entitled "The Showrunner’s Roadmap" – on the art and craft of creating, writing, and sustaining episodic TV series – which also includes interviews with today’s top TV showrunners.