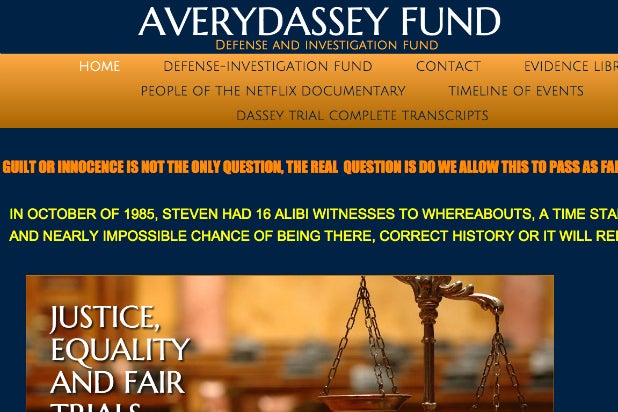 With seemingly everyone talking about Netflix’s “Making a Murderer,” stars and convicted felons Steven Avery and Brendan Dassey are cashing in.

The uncle/nephew combo found guilty in the killing of a local photographer have launched a fundraising website through their family in an attempt to raise money to mount another defense effort.

The rudimentary website includes a Donate page through PayPal, the physical mailing addresses of the two prisoners, as well as that of their family’s auto salvage yard. It also offers an “Evidence Library,” timeline and the Dassey Trial’s complete transcripts. The site features photos and descriptions of the main players in the Netflix documentary.

The AveryDassey Fund website will be set up to accept Bitcoin soon, it states.

The homepage states in all caps: “GUILT OR INNOCENCE IS NOT THE ONLY QUESTION, THE REAL QUESTION IS DO WE ALLOW THIS TO PASS FOR FAIR JUSTICE PERIOD.”

Below that, it reads: “IN OCTOBER OF 1985, STEVEN HAD 16 ALIBI WITNESSES TO WHEREABOUTS, A TIME STAMPED RECEIPT AND NEARLY IMPOSSIBLE CHANCE OF BEING THERE, CORRECT HISTORY OR IT WILL REPEAT ITSELF.”

Finally, under the self-imposed question of “Why a Fund?” the family answers: “The amount of investigation and defense it will take to untangle this web of manipulation, beyond comprehension twisting of facts and tainted testimony will be like that never undertaken if we expect fair results and representation.”

Early on Tuesday morning, TMZ reported that the funding site has raised $2,100 in donations. The family has collected another $1,200 sent to the Avery family home.

The family told the gossip website that they’re upset because someone’s been setting up fake websites soliciting money, which they believe has discouraged people from contributing. But they’re starting to see a steady flow now, they added.

“Making a Murderer,” written and directed by Laura Ricciardi and Moira Demos, traces Avery’s stunning bad luck with Wisconsin law enforcement, specifically the Manitowoc County Sheriff’s Office, which first put him in prison for a rape charge he was exonerated for 18 years later, thanks to DNA evidence.

But that was just the beginning of Avery’s troubles, and the Netflix docu-series strongly suggests that the murder for which he is currently serving a life sentence without parole was a product of police corruption, possibly due to the multi-million dollar settlement he was owed by the department responsible for initially putting him behind bars. Dassey was later convicted of complicity in the murder.

The money raised so far is earmarked for Dassey’s legal fees, as he is the only one with an attorney. Avery is representing himself. The family hopes that is can raise enough money to hire a private investigator.