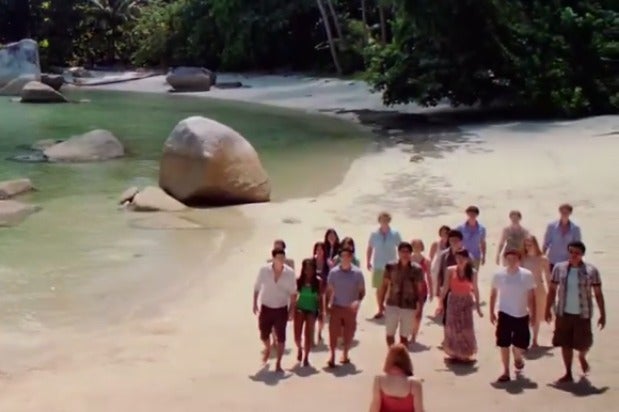 The movie was made on a dare: cross a genre film with a think pic.

Not a cynical dare, certainly not a joke of a dare. This was a stone-faced challenge between cinephiles who still get in fistfights over the finer points of the filmic arts. A dare that sprang from a debate about what young audiences want to see today, positing Opinion A (“kids are idiots”) against Opinion B (“kids are brilliant”).

“Kids” in this context meant teenagers, plus or minus, and if you’re making a movie for teenagers, or so I was harangued, you need to tap their limbic system, the part of the brain controlling the basic emotions: pleasure, anger, fear, and, weirdly, smell. This is the stuff kids will pay for.

But the brain is both pleasure center and supercomputer, so why can’t a movie be dual-purpose too? I put forward my concept: during an old-school atomic apocalypse, a group of high-school seniors would be forced to make brutal choices about their fate and the fate of their friends, using philosophy and logic not academically but as actual tools to decide who lives and who dies. Thrills + thoughts.

My sparring partner voiced an extreme skepticism about this plan to genre-bust my way into the hearts and debit cards of teenagers. But to me, genre-busting always sounds like a car crash; I was thinking more of a cinematic mash-up that would overlay genres for a seamless result.

Having been introduced recently to certain European film funds, I’m familiar now with “mandate paradox.” One fund said they’ll consider working with me as long as I can do “American style without American fingerprints,” “art-house values packing box-office punch,” and “auteur originality–just hide the auteur.”

Now that’s a dare that makes an apocalyptic thriller about a bunch of idea-driven philosophy students at an international school in Indonesia sound perfectly plausible by comparison.

So I wrote the pages, joined up with producing partners, applied for my visa, and flew to Jakarta, i.e. the magnificent chaos that is Indonesia’s capital and primate city. Soon we were scouting locations for this “oddly epic indie” that I’d cooked up, as one of my new producers kept loglining it. (Is there not the whiff of a slam in that attempt at a compliment?)

Bringing in cast from five continents was only the first of the logistical hurdles. Complaints were rarely heard from the footsoldiers of film on our crew (though I myself had my moments) as we jetted, boated, jeeped, and hiked our way across a handful of the Indonesian archipelago’s 17,000+ islands, facing: * 106-degree heat at the 9th-century temple complex of Prambanan, plus a liquid-thick humidity that bedeviled but could not defeat our key makeup artist.

In the shadow of a skyscraper-sized plume rising from its crater, I asked our guide how much time we would have to evacuate in the event of another eruption. He shook his head: “We die.”

* Gorgeous if scorching islets off the coast of Belitung, itself an island off the coast of Sumatra; uninhabited, so our facilities were on the “bathroom boat” anchored twelve minutes offshore. (Timing was everything.)

Though possibly more exotic, these are the tribulations that every film production endures, whether mega-budgeted or a modest affair like ours. The real test for the movie, however, remained: Did my underlying genre mash-up make sense?

Because mustering all this manpower, womanpower, brainpower, and horsepower would be pointless if my little push-back against an antagonist in a Montecito coffee shop eighteen months earlier had been straight-up bonkers.

It was too late now. With every passing day of the shoot we were irreversibly committing to the hard drive a script I’d written in such a way as to let the high-school seniors who populate the story be as smart on film as they are in real life–IMHO.

And there would be no way later to add in what I’d deliberately left out: the ginned-up rivalries and exaggerated dopiness that we see so much of when we see teenagers on-screen, which seems to me a lazy and ultimately false view of the teenage brain.

My observation is that high school is a time of maximum intellectual engagement with the world of ideas, with the tug-of-war of morality, and with the dictates of conscience. Put two or ten or twenty teenagers in a room together and throw in a conversational hand grenade (politics, religion, philosophy, creation)–and you’ll get an explosion of deeply felt, intensely expressed, and fiercely defended opinions on right and wrong, good and evil, life and death.

Teenagers are not apathetic about the sharp edges of their existence. Exactly the opposite: at their age, everything matters. And I’ve never once heard a kid opt out of a debate with his or her peers by saying, “I’m not smart enough to know what I feel about that.”

It’s only by the time we harden into adults that an eagerness to do verbal battle over ideas and their consequences tends to taper off, as a more pragmatic accommodation with existence takes over and a less energetic relationship with one another and with life itself takes hold.

But I was determined to focus on that moment when the window of passion for ideas is still open at its widest. I wanted to depict teenagers tackling big questions about doom and destiny, confronting excruciating dilemmas about the worth of each person, and unpacking existential paradoxes — all with atomic fallout heading their way to burn through skin and fry vital organs if the questions weren’t answered in time.

* Is being smart more important than being kind?

* Is an engineer more valuable to the future of humanity than a poet?

* Is an autistic kid less vital to discovering the truth of the human condition than a teenage Einstein?

* Is a straight kid more important to the evolution of the species than a gay kid?

* If you had to choose (which in this movie you do), would you save all the scientists to reboot the human race or all the artists? And what kind of new human race would be the result?

And sure, I wanted to sell some popcorn in the bargain.

Indonesia, let me say plainly, is a storyteller’s paradise. The beautiful spirit of the Indonesian people can’t be overstated. During our four months traveling their cities, temples, and islands, their hospitality allowed us to juxtapose dark images of a conjured apocalypse with an epic physical splendor.

This is a country whose cinematic assets remind movie directors how lucky they are to have the job. I will be endlessly grateful.

As for the original dare itself, I have to admit that it’s become something of a half-remembered dream. I console myself about this type of idiosyncratic memory loss by recalling a film professor who insisted that movies that aren’t dreams aren’t cinema.

Which still feels like a lesson worth holding onto.

So … theories, arguments, and aspirations aside, the effort over and the result open for inspection, The Philosophers (released in the U.S. as After The Dark) stands as at least some version of what it set out to become: a genre film crossed with a think pic.

Does it work? Only the kids can say.

BIO TheWrap Staff
John Huddles is the writer, director, and one of the producers of AFTER THE DARK. Huddles’s other pictures as writer/director include HIGHER LOVE (aka AT SACHEM FARM), starring Oscar nominees Minnie Driver, the late Sir Nigel Hawthorne and Olivier Award winner/BAFTA & Tony Award nominee Rufus Sewell. Before that, Huddles wrote and directed FAR HARBOR, starring Academy Award winners Jennifer Connelly and Marcia Gay Harden, and Oscar nominee Dan Futterman. Huddles is a graduate of the American Film Institute in Los Angeles, as well as Johns Hopkins University's Nitze School of Advanced International Studies in Washington D.C.

John Huddles is the writer, director, and one of the producers of AFTER THE DARK. Huddles’s other pictures as writer/director include HIGHER LOVE (aka AT SACHEM FARM), starring Oscar nominees Minnie Driver, the late Sir Nigel Hawthorne and Olivier Award winner/BAFTA & Tony Award nominee Rufus Sewell. Before that, Huddles wrote and directed FAR HARBOR, starring Academy Award winners Jennifer Connelly and Marcia Gay Harden, and Oscar nominee Dan Futterman. Huddles is a graduate of the American Film Institute in Los Angeles, as well as Johns Hopkins University's Nitze School of Advanced International Studies in Washington D.C.