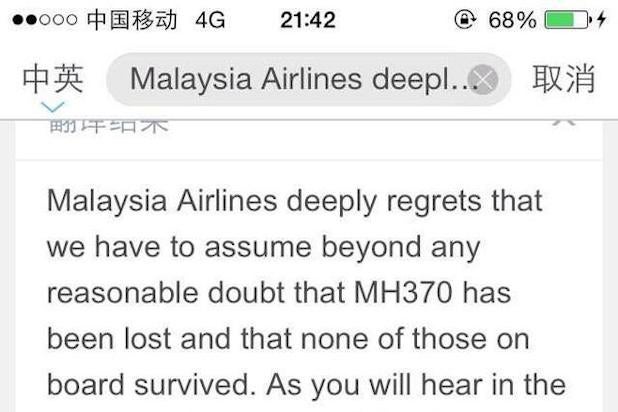 Families of the passengers of Malaysia Airlines Flight 370, which went missing for more than two weeks, were sent a text message from the airline informing them that their loved ones were dead.

“We have to assume beyond reasonable doubt that MH370 has been lost and that none of those on board have survived,” the message said. “We must now accept all evidence suggests the plane went down in the southern Indian Ocean.”

The Malaysian prime minister later made the announcement public but the families of the 239 missing passengers were first notified by the airline’s text.

Many people on social media responded in horror, saying the airline’s action was cold and that the families deserved better.

You read that right… Malaysian Airlines sent the families a TEXT message about the plane being presumed lost in the Indian Ocean.. A TEXT

BREAKING NEWS. Malaysia Authorities inform family by text msg that their loved ones were lost. U should be ashamed of yourselves