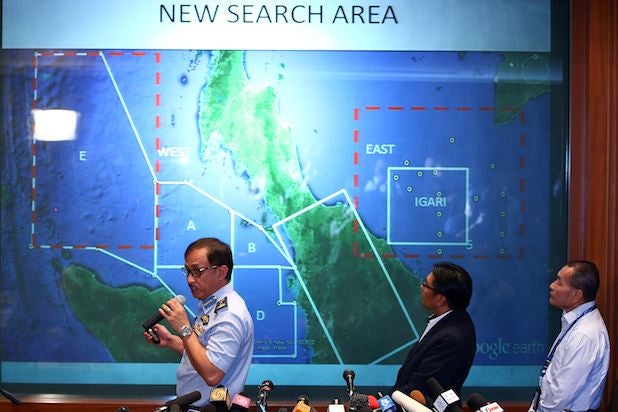 Malaysia Airline Flight MH370 has been missing for almost two weeks, giving conspiracy theorists plenty of time to read articles about the subject, catch a few minutes of CNN’s non-stop coverage, and then make stuff up, accordingly.

With authorities from 26 nations still scratching their heads as to why the Boeing 777 — bound for Beijing — vanished on March 8 with 239 people on board, the public has taken to coming up with their own theories as to why the flight has gone missing. In the process, they seem to be increasingly confident that aliens, the Illuminati, terrorists, top-secret technology and even internationally-renowned recording artist Pitbull hold keys to the truth.

Here are our six conspiracy theories — ranging from interesting to batshit crazy — that have appeared on the web since Flight 370 disappeared from the skies. Whether or not they’re remotely plausible, well, that’s up for you to decide.

I don’t see why they don’t just come out and say flight 370 was abducted by aliens. It’s so obvious that that’s the case here.

Need more than a one word explanation? This guy seems to have a pretty good understanding of the obvious extraterrestrial involvement.

2. The plane was shot down by “some hostile country,” says Rush Limbaugh
The conservative radio host unveiled a theory (read: a complete guess) last Friday that “is as good as anybody else’s,” even though he introduced it by stating, “I don’t know if this is possible … but let’s say it is.”

“How about the jet is flying along and you have a total electronic failure, but the engines keep working,” Limbaugh told his listeners. “So then the crew says, ‘We got to get back home. We got to get back to Kuala Lumpour. We can’t fly with no electronics.'”

“It’s dark, nighttime. They fly over a bunch of unfriendly countries, and they can’t identify themselves, and they’re not identified, there are no lights on. There’s been a total electronic failure,” Limbaugh continued. “What if some hostile country flew up there and shot it down, and then discovered their mistake and nobody wants to admit what happened?”

Despite acknowledging the fact that he has no idea if the theory is possible, he maintained that it “holds up, and works well.”

Good question. It may join the disappearance of the flight as one of the greatest mysteries of our time.

4. The plane can’t be found, because it’s INVISIBLE!
Others have gone more scientific in their scrutiny of the plane’s disappearance, stating that the plane may be cloaked in some sort of ‘invisibility’ technology, allowing it to fly undetected. These claims are rooted in the presence of 20 passengers on board the flight, employees of Freescale Semiconductor, a technology firm that makes technology used in everything from mobile phones to NASA operations.

“It is conceivable that the Malaysia Airlines Flight MH370 plane is ‘cloaked’, hiding with high-tech electronic warfare weaponry that exists and is used,” Beforeitsnews wrote.

Freescale Semiconductor’s Facebook page has been blasted with questions, with one user asking: “Why were so many Freescale employees traveling together? What were their jobs. Were they on a mission and if so what was this mission? Can these employees be the cause of the disappearance of this plane? Could the plane have been then hijacked and these people kidnapped? Did these employees hold valuable information, did they have any valuable cargo with them? Did they know company and technologicial secrets? With all the might of technology why cant this plane be located? Where is this plane where are these people?”

Somebody give that aspiring investigative reporter a job at the New York Times — as long as it’s not an editor position.

5. The plane was hijacked by terrorists, or maybe even the pilots themselves.

Malaysian Prime Minister Najib Razak stated that he believed the plane was “deliberately” guided off track by a highly-skilled individual. The question then remains — whodunit?

Some conspirators are targeting the pilots, one of whom was photographed in a t-shirt reading “Democracy Is Dead”, and had a flight simulator his home. Others are pinpointing two Iranian nationalists who boarded the plane using fake passports, claiming that a hijack took place in the name of a terrorist organization.

According to Wall Street Journal sources, U.S. counterterrorism officials are pursuing the possibility the either the pilot or a hijacker diverted the plane toward an undisclosed location, “with the intention of using it later for another purpose.”

Although no terrorist organization has claimed responsibility, conspirators have tapped everyone from the Taliban to the Illuminati for being potentially responsible for the eerie disappearance.

6. Pitbull  and Shakira predicted (or…knew!?) that this would happen, and even sang about it in 2012 hit single “Get It Started.”

Speaking of the Illuminati, those dedicated to exposing the top-secret society’s existence have taken to YouTube to explain the link between the missing plane and Pitbull’s lyrics.

“Now it’s off to Malaysia,” Pitbull sings at one point in the song. “Two passports, three cities, two countries, one day.”

To the untrained eye, the lyrics may just be a simple coincidence. Thankfully, anonymous internet commenters have identified that the “two passports” is a reference to the stolen passports the two Iranians used to board the plane, while “three cities” refer to the capital cities of Malaysia, China and Vietnam, and the two countries are Malaysia and Vietnam.

Or whatever other cities and countries could be inserted to make this theory make any kind of sense. Here’s the video so you can comb through every frame, beat and syllable to find the truth.