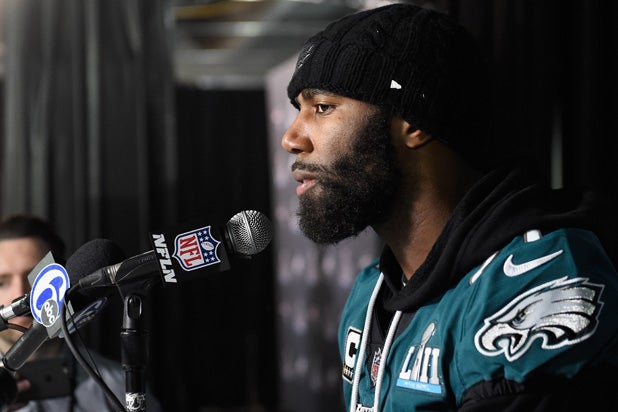 The day after the Philadelphia Eagles were scheduled to visit the White House to celebrate their Super Bowl LII victory, the strong safety refused to answer questions from a crowd of reporters and instead held up signs voicing his opinion about the current political climate.

“You aren’t listening,” read one handwritten sign. “More than 60% of people in prison are people of color,” said another.

Also Read: Malcolm Jenkins Reacts to White House Disinvite: 'It Takes Courage to Stand Up for the TRUTH'

The media standoff in the Eagles’ locker room during NFL minicamp was prompted by President Trump disinviting the Super Bowl champions to the White House this week, saying it was because the players “disagree with their president” who “insists that they proudly stand for their national anthem.”

On Tuesday, Jenkins hit back at the White House in a long Twitter post, calling the snub a way to “paint the picture that these players are anti-America, anti-flag, anti-military” — but he clearly thought his message fell on deaf ears and decided to clarify exactly what players have been protesting.

According to ESPN, the rest of his signs read:

Jenkins had previously said that he would not attend the traditional visit to meet the president after the Eagles beat the New England Patriots on Feb. 5

He isn’t the only Eagles player to blast the White House’s statement. On Monday, wide receiver Torrey Smith wrote on Twitter that “It’s a cowardly act to cancel the celebration because the majority of the people don’t want to see you. To make it about the anthem is foolish.”

Instead of speaking, Malcolm Jenkins holds up signs at his locker to get his message across. pic.twitter.com/mg9JdhFgYZ

Malcolm Jenkins responded to questions today by holding up a series of signs. He did not speak. Here are a few. pic.twitter.com/I01lfMwVgq

Super LII is just around the corner and, shocker, the New England Patriots will once again be representing the AFC. However, for only the third time in the Super Bowl era, the Philadelphia Eagles have prevailed over the NFC and will look to dethrone the greatest football dynasty in history. And they'll be cheered on by rabid Eagles fans, including a few famous celebrities that are looking to make history.