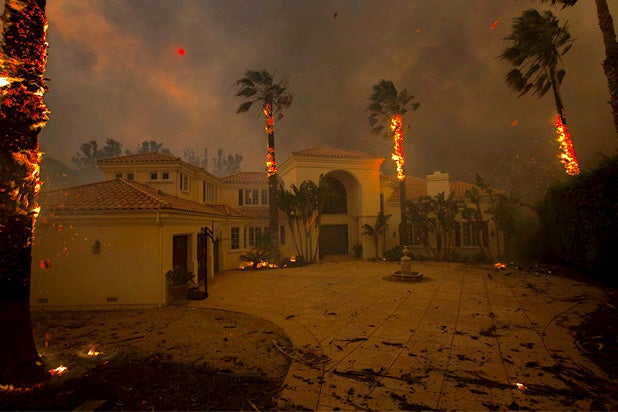 Hollywood stars and executives impacted by the Woolsey and Hill California fires detailed the “apocalyptic” scene as many evacuated their homes — or watched as properties in the upscale areas in Malibu and outside Los Angeles burn down.

“It was apocalyptic and so fast,” one prominent Hollywood figure who evacuated his property and asked not to be identified, told TheWrap.

“It’s a surreal thing. The fires — you’re in a war zone,” another top industry figure said. “There are still smoke and embers when you drive in the hills and you’ll see a house on fire. There’s flames, and no firemen. Telephone poles are on fire everywhere.”

Actress Rosanna Arquette told TheWrap that her Malibu house is safe for now, but the overwhelming anxiety kept her up all night.

“To see the ravaging of our communities being swallowed up by fire and smoke… There was a face in the smoke, it looked like the devil,” she said. “This is a disaster zone at immense proportion. We need to be human beings helping each other without borders.”

Stars including Kim Kardashian, Lady Gaga, Caitlyn Jenner, Rainn Wilson and Guillermo del Toro have been forced to evacuate their homes, often taking only a few belongings with them. “Doctor Strange” director Scott Derrickson tweeted that he had lost his home to the blaze.

However, not everyone heeded the calls for evacuation. Ron Meyer, the vice chairman of NBCUniversal, disregarded calls to evacuate and stayed behind to defend his beachside property, according to an individual with knowledge of his situation. A spokesperson for NBCUniversal had no comment.

Residents of affected areas were not allowed back into their homes on Saturday, according to several who spoke to TheWrap.

Oscar-winning filmmaker Guillermo del Toro said on Twitter he drove back to his house on Friday to “retrieve my notebooks and a small suitcase with 2 photos, 5 books and few small things.”

“The Shape of Water” director — who keeps an extensive collection of memorabilia at his Malibu estate, noted that his house was still standing as of Friday. “We put out a small bush that was on fire using water I had in the car,” he added.

Two people have been found dead in the burn areas, Los Angeles County Sheriff’s Department Chief John Benedict confirmed. In addition, Councilmember Bob Blumenfield said in a statement that over 250,000 people have been evacuated from the Ventura County fire areas, and the shifting winds could bring added destruction.

As of Saturday evening the fire was just 5 percent contained.