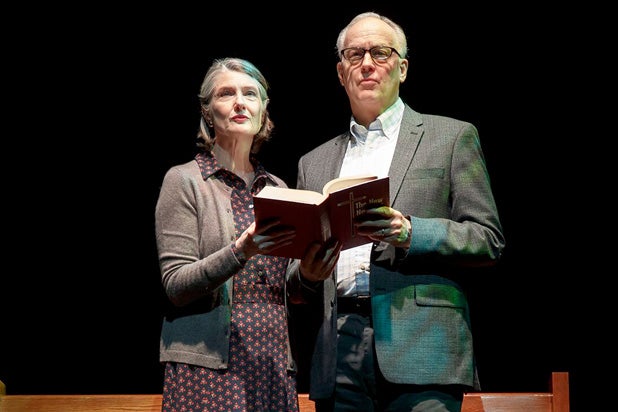 Aficionados of high camp must run to see Tracy Letts’s “Man From Nebraska,” which opened Wednesday at Off Broadway’s Second Stage Theatre. In the second act, an angry, young British sculptor named Harry (Max Gordon Moore) reluctantly unveils a work in progress. He doesn’t like to show his art before it’s finished, but a man from Nebraska named Ken (Reed Birney) wants a look on his visit to London. Since the studio is small and the draped sculpture is humongous, the request is more than understandable.

What Harry unveils is truly “awful,” as in the original definition of the word: “full of awe.” Imagine that wonderfully embarrassing moment in “The Sandpiper” when Richard Burton enters a multimillion-dollar hut on Big Sur and discovers a naked Elizabeth Taylor posing for Charles Bronson. Take that nude of Liz and blow it up 10 times.

That’s what greets the man from Nebraska, as well the audience, in David Cromer’s staging of the Letts’s 2003 play, which is only now receiving its New York stage premiere. It’s the kind of statue, if put in a public place, that would cause weak men to faint and mothers to petition.

No sculptor is credited in the Playbill, but since Takeshi Kata is the scenic designer, he gets the nod. Stunning.

Ken, the man from Nebraska, is on an existential quest after waking up one day and discovering that he no longer believes there is a God. He leaves his wife (Annette O’Toole) back in Lincoln to travel to London. Why he doesn’t go to Mecca or Rome or Branson, Missouri, is never explained. But here he is in London, and after almost being unfaithful to his wife and drinking alcohol and dropping acid at a disco for the first time in his life, he ends up in Harry’s studio, where he is stunned into wanting to be an artist himself, at age 65 or so, by this Brobdingnaggian nude. Also unclear is why Ken ultimately gives up this pursuit to return to his wife in Nebraska. Does he have no talent? Or is his talent unrecognized by the angry, young British artist, who definitely has no talent?

It’s perfectly clear why it took “Man From Nebraska” 14 years to arrive on the New York stage after its world premiere in Chicago in 2003. Letts condescends to his hero’s dilemma by making the representation of his religion, a Baptist minister named Reverend Todd (William Ragsdale), into a complete dolt. The play also begins with a series of nearly wordless vignettes that show Ken and his wife going about their life: driving the car, singing at church, eating in a restaurant, watching TV. The surprise isn’t that Ken has lost his religion; it’s that he’s not already embalmed.

With his great soap opera of a play, “August: Osage County,” Letts managed to deliver shocking revelations at 10-minute intervals. Which is no small feat considering the play’s three-hour-plus running time.

In “Man from Nebraska,” written four years earlier, Letts hadn’t quite mastered the feat of parsing out the Grand Guignol. Rev. Todd tries to give comfort to the distraught wife by telling a story of cannibalism in his own family. On his plane ride to London, Ken meets a woman (Heidi Armbruster), with whom he might have had sex if she didn’t scare him off with all those S&M toys in her hotel bed.

A nymphomaniac, a dullard preacher, an angry artist. You can’t blame the actors here for performing what’s on the page, although it might have helped if Cromer had directed them to look for some subtext. Reed manages to be much more empathetic. In a few scenes, he even dazzles.

The miracle of the theater is how, amid so much fluff, a character and a performance emerge as if from another, much better play. It would be easy to credit Nana Mensah alone for her stunning portrayal of Tamyra, a bored, none-too-helpful bartender in London.

Before she appears late in act one, Letts occasionally (but not often enough) delivers a stinging one-liner that reveals character, as well as draws blood. Ken’s retort to a fellow passenger who fears turbulence on the airplane makes absolute nonsense of the phobia, and tells us much about his despair. Letts’ insightful writing in the play’s barroom scenes between Ken and Tamyra, however, is much more sustained and belongs in another league.

Mensah fully embodies the overly accomplished, under-performing worker of modern urban life. She’s the employee who’s stuck in a cold war with her own existential despair, her awareness dwarfing the problems of the man from Nebraska. And Tamyra has a lot to be angry about. She’s also Harry’s model. Who wouldn’t be miffed?