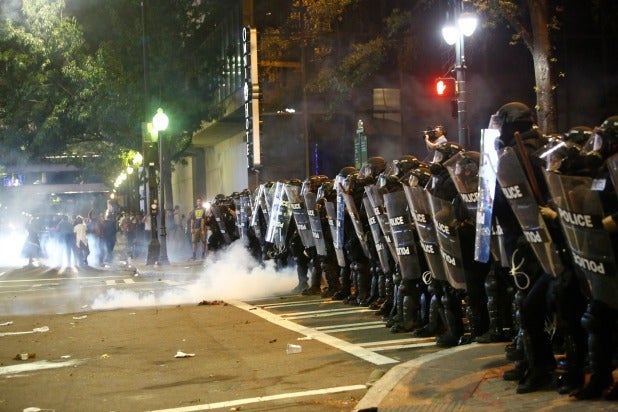 (UPDATE: Police now say that the man who was previously reported as dead is in critical condition. In addition, a state of emergency has been declared in Charlotte. The story below has been updated throughout.)

A second night of demonstrations in Charlotte, North Carolina, turned dramatically violent after one man was shot and critically injured in the crowd, the New York Times reports.

Previous reports, citing police, said that the man had died. But those were updated later in the evening. According to the AP, police say that the wounded man was not shot by a police officer.

Protesters gathered for a second night following the police-shooting death of Keith L. Scott, an African-American civilian, one day earlier. A police officer was also injured in the protest, CNN reports.

As night fell over the city’s Uptown neighborhood, police assembled in riot gear and fired off tear gas at the swelling crowd. Later in the evening, North Carolina Gov. Pat McCrory declared a state of emergency, per the AP.

It was the second night of protests after police shootings of African-American men, this time in Ohio, Oklahoma and North Carolina — where 43-year-old Scott was gunned down in the parking lot of an apartment complex on Tuesday, according to the New York Times.

Earlier in the day, the city’s star NFL quarterback, Cam Newton of the Carolina Panthers, appeared at a press conference to address the shootings.

Also Read: ACC Is Latest League to Pull Games Out of North Carolina

“I’m a firm believer of justice and a firm believer of doing the right thing, and I can’t repeat enough about just holding people accountable,” Newton said. “I’m an African-American. I am not happy with how justice has been dealt with over the years.”

“But we also, as black people, have to do right by ourselves. We can’t be hypocrites. I say that on one voice and also another voice that when you go public, or when things happen in the community, it’s not the fact that things are happening, it’s the way they’re being treated after they happen,” Newton added.

“I have a son and a daughter that I’m responsible for. So how would I be if one day they come home and there’s no more daddy?” he said. “Money doesn’t matter in that sense. People need to be held accountable, that’s all.”