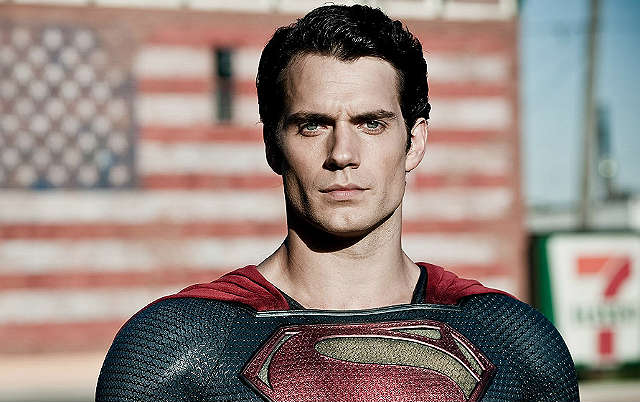 In 1986, DC Comics published two titles that would forever push the superhero genre toward what has been known as the “grim and gritty” look – Frank Miller‘s “The Dark Knight Returns” (whose tough-guy expressionism inspired both Tim Burton and Christopher Nolan‘s subsequent screen versions of Batman) and Alan Moore and Dave Gibbons’ “Watchmen” (which spawned Zack Snyder’s nice-try effort to wrestle this dark and complex graphic novel to the screen).

Now Snyder (director) and Nolan (producer, shared story credit) have teamed up on the iconographic DC Comics character who seemed impossible to bring into the “grim and gritty”- Superman. Many characters (and comics readers) of the post-1986 landscape have disparaged the legendary superhero as a “big blue boy scout” for his primary-colored uniform and lack of moral ambiguity, but “Man of Steel” sets out to darken up the last son of Krypton and to fit him to the current trend of brooding, haunted vigilantes.

For the most part, it works; in the previous big-screen treatments of the character, we’ve never seen a pubescent Clark Kent deal with the disconcerting sensory overload of suddenly realizing he can hear things from miles away and see through everyone’s skin with his X-ray vision. When teen Clark saves his classmates from a terrifying bus accident (which calls to mind the horrifying opening sequence of Atom Egoyan’s “The Sweet Hereafter”), it’s less cause for celebration than a moment of adolescent angst over the discovery of his difference. Nor have we ever seen a beginner Superman fall out of the sky while teaching himself to fly.

Even that iconic costume emerges in darker hues – the blues are blackish and the reds are more wine-colored. (He’s still ignoring Edna Mode’s “No capes!” rule, which implies that “The Incredibles” doesn’t exist in this film’s world.)

“Man of Steel” begins as Krypton is on the brink of destruction, with the ruling council ignoring the pleas of scientist Jor-El (Russell Crowe) to figure out a way to save the planet’s bloodlines. Jor-El’s onetime friend General Zod (Michael Shannon) picks that moment to stage a coup, which is akin to seizing the bridge on the Titanic, and even though everyone knows the planet is about to be destroyed, Zod and his minions are still exiled into space as punishment for their treason. (Which makes no sense, but it’s one of the few obvious fumbles in the screenplay by David S. Goyer.)

Baby Kal-El rockets his way to Earth, but the movie leaps forward to adult Clark Kent (Henry Cavill) working on a fishing trawler to get close enough to rescue derrick workers from an oil rig fire, all the while attempting to do so in secret. He eventually hears about an Antarctic expedition that piques his interest, and which provides him with the opportunity to come face to face with Lois Lane (Amy Adams), who’s there to do a story on a strange object that’s been found in the ice.

See video: Henry Cavill's Superman Fights to 'Save All of' Humanity in New Action-Packed 'Man of Steel' Trailer

That object is a Kryptonian ship that contains Jor-El’s life memories in its computer, and as Clark flies it away to commune with the father he never knew, Lois traces the mystery man’s identity all the way back to Smallville, where Clark was raised by his adoptive parents Jonathan (Kevin Costner) and Martha (Diane Lane), whose values of basic decency and responsibility we see them impart to their alien son in flashback.

By the time Clark puts on the suit, Zod and his crew come out of stasis and take over Earth’s transmissions, demanding that Kal-El be handed over to them, and then it’s fight-fight-fight. It’s worth noting that the melees are pretty spectacular, particularly since both sides are still getting used to their powers on Earth, but there are perhaps one or two too many of them. (The movie runs 140 minutes and feels like it could lose at least ten of them.)

The performances here resonate, though: Cavill gets the character’s square-jawed forthrightness down without sacrificing too much of Clark/Kal’s uncertainty and even bewilderment; his performance and Goyer’s script both go a long way in presenting this character as powerful but not invulnerable, which automatically makes him more interesting. (Bullets still bounce off of him, but the impact makes him flinch.)

The appealing Adams, again with the script’s support, may be the first actress who plays Lois Lane not as a 1930’s-style “girl reporter” but instead as an actual journalist who happens to be a woman. Shannon can, of course, do the villain thing in his sleep by now, and while his Zod doesn’t have the shadings of, say, the hired killer of “The Iceman,” the actor still makes an impact.

There’s no question that the movie reflects current trends in action and superhero movies, from one character’s sacrifice that feels like what a Spider-Man fan might call a “reverse Uncle Ben” to the shameless trafficking in 9/11 imagery: Like “Star Trek Into Darkness,” another reboot that’s also a remake of a sequel, we get planes flying into buildings. “Man of Steel” ups that ante with dust-covered civilians rescuing each other from urban rubble as well.

One major plot twist, which will not be revealed here, promises to spark debate and controversy amongst longtime Superman buffs; if you thought “organic web shooters” was the stuff that message board flame-wars were made of, you ain’t seen nothing yet. (And fans of product-placement drinking games should keep an eye peeled for the many, many on-screen appearances of Sears, IHOP and 7-Eleven.)

All in all, however, this “Man of Steel” flies, even if it doesn’t quite soar. Snyder’s direction feels far more assured than it did in the misfires of “Watchmen” and especially “Sucker Punch,” and now that the requisite first-movie origin story has been accomplished, the movie lays the ground for what could be some thrilling sequels featuring a Superman who’s both exactly what people want to see and a significantly different take on a well-established character.