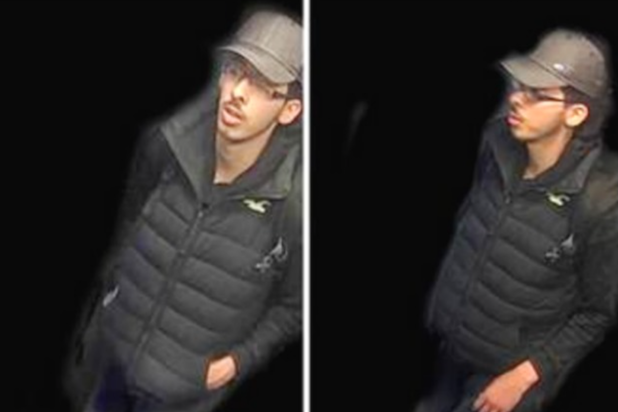 Greater Manchester Police have released two photos of Salman Abedi, the man they say “committed the attack” at an Ariana Grande concert in the U.K. Monday, killing 22 people and injuring 119 others.

In a tweet, Manchester police said that the photos were taken from CCTV and urge residents to come forward with any information about Abedi’s movement from May 18 through the deadly suicide bombing Monday night.

“The investigation is making good progress and we know the last places Adebi went was a city centre flat and from there left to make his way to the Manchester arena,” police said. “The flat is highly relevant as a location which we believe may be the final assembly place for the device.”

Abedi, a 22-year-old son of Libyan refugees and a first-generation Manchester resident, planted a nail bomb outside of the arena on Monday, where thousands of fans had just attended Grande’ concert.

Manchester police are still searching 14 locations and 1,000 people are involved in the investigation.

“In the past five days we have gathered significant information about Abedi, his associates, his finances, the places he had been, how the device was built and the wider conspiracy,” the police said. “As a result of the arrest and searches which have taken place we now have many further lines of enquiry [sic]. We already have more than 1,500 actions we are pursuing.”

The statement went on to say: “This is still an active investigation which is not slowing down,” police said. “Our priorities are to understand the run up to this terrible event and to understand if more people were involved.”

Thousands gathered in Manchester’s Albert Square on Tuesday evening. A minute of silence gripped the historical square as the crowd — many of whom were young girls similar in age to the Grande fans who filled the arena the night before — mourned those who lost their lives.

The vigil was followed by words from mayor Andy Burnham, Manchester Chief Constable Ian Hopkins and poet Tony Walsh, who read Longfella’s poem “This Is the Place” as an ode to the victims.