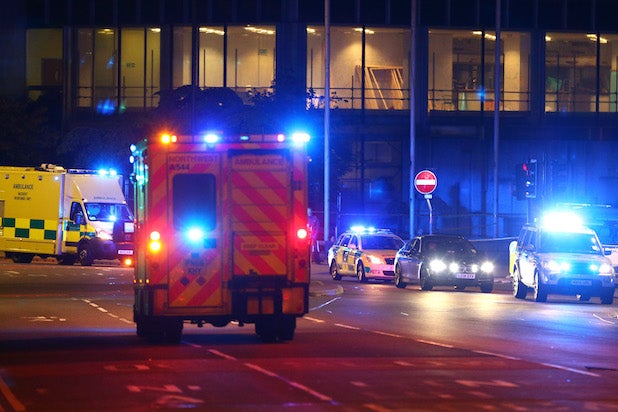 Despite major advancements in counter-terrorism since 9/11, Monday’s suicide bombing in Manchester, England, which killed at least 22 people and injured dozens, serves as a stark reminder of just how difficult it is to defend large venues, experts say.

Unlike the 2015 Bataclan attack in Paris, where 90 people lost their lives during the Eagles Of Death Metal show, the Manchester bombing occurred just outside the front doors of the Manchester Arena as concertgoers were leaving the venue in droves.

“Areas outside the perimeter remain a concern,” Brian Levin, terrorism expert and director of the Center for the Study of Hate and Extremism told TheWrap. “There are going to be structural, physical and intelligence vulnerabilities in any place the public congregates.”

Many venues already use metal detectors, bomb sniffing dogs, security cameras, guards, bollards and a host of other measures to protect concertgoers.

But the Manchester bombing has exposed a security “Achilles heel,” said Levin, one that has long eluded safety experts: the areas located outside of secured zones — including transportation centers, parking lots and walkways — both heavily trafficked at the beginning and the end of each event.

“We’re really good at security in the beginning and the middle but we’re probably a little lax toward the end,” Michael Downing, executive vice president of security for Prevent Advisors, which specializes in arena and stadium security, told TheWrap.

“Looking not only inside the arena but outside the arena, especially at vulnerable locations where there are choke points, where there are mass gatherings of people, the use of ‘vapor wake’ [bomb-sniffing] dogs is another deterrent as well as a detector,” he said referring to dogs who can detect scents often attributed to suicide bombers.

But while venues can always add more security measures, at the end of the day, some experts say, there is only so much they can do in these types of situations.

“If a bad guy wants to do harm and is willing to get killed in the process, that’s very difficult to stop,” Steven Edelman, a venue security expert, told TheWrap. “The Manchester bombing was in a public area. Anyone can go there anytime, day or night.”

Still, some security counter-terrorism experts have urged for more vigilance, as terrorists shift their focus from the harder targets inside the venues to the more softer targets around the perimeter.

“You can’t let your guard down,” said Michael O’Neil, chief executive officer at MSA Security and the the first Commanding Officer of the NYPD Counterterrorism Division. “The same vulnerability when people go in is there at the end of the event.”

Venues have made some changes to protect the public, including lighting up pedestrian areas outside the venue and an approach called Crime Protection Through Environmental Design, or CPTED, a multi-disciplinary strategy which aims at deterring criminal behavior by physical design. In other words: Limit places where bad guys can do bad things.

In the meantime, Levin says there are a few things people can do to better protect themselves during a concert or an event: “Don’t panic, have a designated meeting place, know where all the exits are and be aware of someone who looks out of place.”