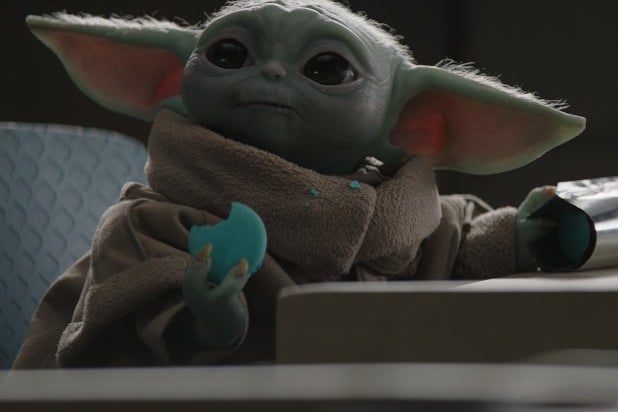 WARNING: Contains major spoilers for episode 13 of “The Mandalorian.”

It’s safe to say that the post-Thanksgiving episode of “The Mandalorian” is the biggest one yet for the “Star Wars” series. Titled “The Jedi” and written and directed by “Clone Wars” creator Dave Filoni, the episode ties the Disney+ series into the larger Star Wars mythos by introducing one of the most popular characters ever to come from the series’ prequel era.

Oh, and Baby Yoda has a name now. His name is Grogu. Cute.

That big reveal comes when the Mandalorian and his little green charge arrive on the burnt-down planet Corvus and come face-to-face with “Clone Wars” heroine and Anakin Skywalker’s former padawan, Ahsoka Tano, played here by Rosario Dawson in the character’s live-action debut. Communicating through Force telepathy with the child, Ahsoka reveals Grogu’s name and origins.

Also Read: For a Hefty Price, You Can Also Share Baby Yoda's Macarons

It seems that Grogu was raised in the Jedi Temple of Coruscant, before Anakin killed all the younglings there and destroyed the place in “Revenge of the Sith.” Where he was after the rise of the Empire is still unknown. “Someone took him from the temple,” says Ahsoka, “then his memory becomes dark.”

When Mando asks Ahsoka to train the child, she refuses, saying that she sensed that Grogu has become quite attached to the bounty hunter since he rescued him from Evil Werner Herzog last season and that such attachment risks turning him into another Anakin. “I’ve seen what feelings do to a fully trained Jedi Knight,” she warns. “I will not start this child down this path; better to have his abilities fade.”

But after Ahsoka and Mandalorian team up to overthrown a corrupt magistrate on the planet, Ahsoka gives him another option: on the planet Tython, there is an abandoned Jedi Temple where Grogu can plug into the Force and find another Jedi that might be willing to train him. If he reaches out through the force, there’s a chance a Jedi may sense his presence and come searching for him. Then again, there aren’t many Jedi left,” she says.

Also Read: 'The Mandalorian' Left a Crew Member Onscreen During This Week's Episode

As for Ahsoka, she has her own quest, and it too ties into her animated series past. During her fight with the magistrate, she demands the whereabouts of Grand Admiral Thrawn, the villain in the Filoni series “Star Wars Rebels” who was an ally to Darth Vader. It may be possible that Filoni and “Mandalorian” creator Jon Favreau may bring Thrawn into the show as well as they continue to fill out the post-Empire galaxy that the Disney+ series is set in.

“The Mandalorian” is streaming now on Disney+, with the season finale set to air Dec. 18.