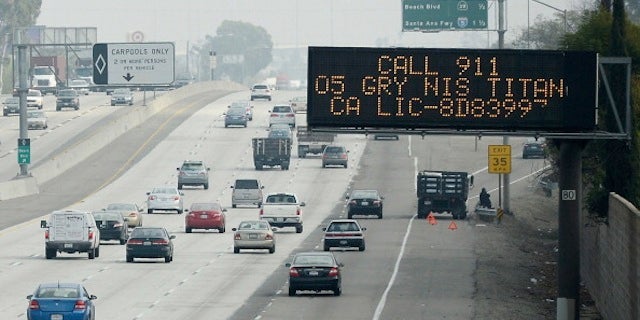 A manhunt for Christopher Dorner, a Naval reservist and former Los Angeles Police Department officer accused of killing one police officer and wounding two others, has gripped Southern California as police scramble to catch him. Dorner, who was fired from the police force after reporting false information about a fellow officer, has vowed to "terminate" his former colleagues and families in a manifesto he is believed to have published online.

Though Diaz was unable to say how many law-enforcement agencies or officers are enlisted in the hunt for Dorner, he said that they are casting "a very wide net" in the search.

Police say that Dorner shot and grazed one officer in Corona, Calif., before shooting two officers as they were stopped at a red light in Riverside, killing one of them and wounding the other.

The 33-year-old is also suspected of killing Monica Quan — the daughter of retired LAPD Capt. Randy Quan — and her fiancé, Keith Lawrence, in Lawrence's car in the parking area of the couple's Irvine, Calif., condominium over the weekend.

Dorner reportedly blamed the elder Quan for his dismissal from the force.

"The person capable of doing this is mobile," Diaz said in the press conference. "It is a very wide net, and we are using all of the tools at our disposal to bring this person to justice."

Diaz also noted that the Riverside Police Department has "made some modifications to our deployment" to accommodate the search.

Asked his opinion of Dorner, Diaz told reporters, "I think my opinion of the suspect is unprintable."

Across Los Angeles' freeways this morning, electronic signs cautioned citizens to be on the lookout for Dorner's vehicle, a gray Nissan Titan with the California license plate 8D83987. However, it's believed that he has changed his license plate at least once since the hunt began, and may do so again, police said.

Fox 11 also reported that a truck matching the description of Dorner's vehicle had been found "burned out" in the Big Bear resort area.

Police representatives told reporters Thursday morning that the situation is particularly difficult because, as a former officer, Dormer is familiar with their tactics. Dorner also reportedly had Naval intelligence training.