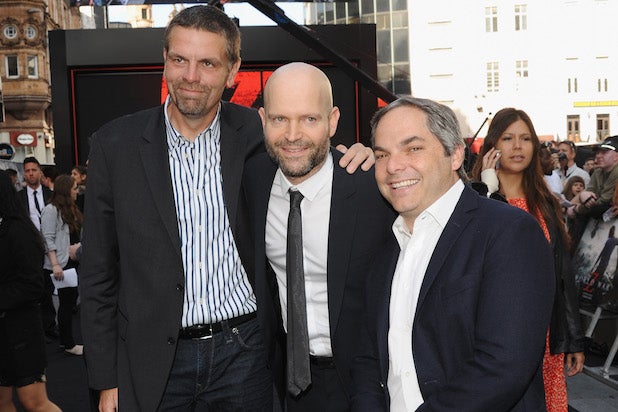 Marc Evans has been named president of Paramount’s Motion Picture Group, it was announced Monday by Brad Grey, chairman and CEO of Paramount Pictures.

Evans replaces Adam Goodman and his ascent has been rumored over the past several weeks throughout Hollywood, which began speculating about the vacancy as soon as Goodman was let go earlier this month. Paramount offered Goodman a first-look deal at the studio, but it remains unclear if he has accepted.

Evans is a 12-year veteran of the studio and a well-respected creative executive who most recently served as the president of production. He will assume the position immediately and report to Grey.

“Having evaluated the potential candidates for this role, it quickly became clear that Marc was the most qualified and that he has truly earned this position,” said Grey. “He has immense talents, a strong creative vision, deep integrity and an unrivaled work ethic. We take great pride in the fact that Marc has professionally grown up at Paramount, that he has overseen production of so many wonderful pictures here, and that he had such strong support from our creative collaborators. We couldn’t be more excited about the future.”

“Over the last 12 years at Paramount, I have had the honor and privilege to work with the world’s finest filmmakers and our studio’s amazingly talented staff,” said Evans. “I am deeply grateful to Brad for this opportunity. I look forward to helping execute our studio’s creative strategy and doing the thing I love most, working with our team to help filmmakers create movies that entertain and inspire people around the world.”

Also Read: Adam Goodman on His Way Out at Paramount (Exclusive)

While Grey did consider outside candidates, Evans was always seen as the favorite for the job, having earned his stripes at Paramount. He has served as the studio’s president of production since 2010 and knew its business better than anyone else. Evans joined Paramount in 2003 as VP of production before being promoted to senior VP in 2006 and executive VP in 2008.

Paramount ranks third among studios in terms of market share at this year’s box office, behind leader Warner Bros. and Universal Pictures. Of its three releases, “The SpongeBob Movie: Sponge Out of Water” is a hit with $154 million domestically and $270 million worldwide, while “Project Almanac” and “Hot Tub Time Machine 2” missed.

The studio doesn’t have another movie out until July 1, when ‘Terminator: Genysis” rolls out. The first of three planned reboots of the Arnold Schwarzenegger sci-fi series will be followed by Tom Cruise in “Mission: Impossible 5” on July 31.

“Paranormal Activity: Ghost Dimension” and “Scouts vs. Zombies” open a week apart next on Oct. 23 and Oct. 30, whiletThe horror film “Rings” follows on Nov. 13. “Monster Trucks” will close out the studio’s year on Christmas Day.

Evans is pictured above on the left with Adam Goodman and “World War Z” director Marc Forster.