For the better part of the first episode of HBO’s new Kate Winslet-led limited series, “Mare of Easttown,” viewers might have been confused about why they were following the story of teenage mother Erin McMenamin (Cailee Spaeny) as closely as they were watching Winslet’s Detective Mare Sheehan. After all, Mare, a small-town Pennsylvania detective, is the clear protagonist of the show who is haunted by her inability to solve the case of her friend’s missing daughter, Katie Bailey, and never once crosses paths with Erin.

But in the closing moments of Sunday’s series premiere, it became apparent that we were following Erin because she was about to become Mare’s next case, as we cut to her dead body lying in the woods.

Speaking to TheWrap, creator and showrunner Brad Ingelsby and director and executive producer Craig Zobel broke down the reasoning behind following Erin and Mare equally throughout the first episode. 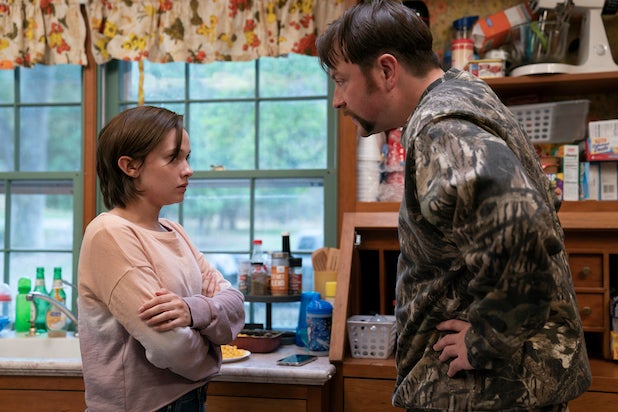 Ingelsby said leaving viewers with all those questions “raises the stakes” by the end of the series premiere, given that “you have this lingering issue with Katie Bailey and what’s happened to her, and is Mare going to be able to figure out what happened to Katie?

That, of course, is “compounded” by Erin’s death, because she’s not just missing, she’s actually dead.

“Now the community’s like, it’s a second girl, you still don’t know what happened to Katie. We just felt like it was a nice way to raise the stakes at the end of Episode 1,” Ingelsby continued. “Also, it was sort of a way to, I think, structurally tell a different story. In a lot of crime dramas, you sort of open with the death and the investigation really starts from the opening shot. Whereas in this episode, it’s kind of a slice of life show, really. And then it kind of ends with a bang, which is, ‘Oh, wow.'”

Zobel (HBO’s “The Leftovers”) who directed not just this episode, but every episode of the seven-installment limited series, tipped his hat to actress Spaeny for getting you to care about Erin before you have any real reason to do so.

“I wanted to make sure that you really wanted to follow her story, and I find Cailee Spaeny to be an incredible actor and really interesting,” Zobel said. “And having her story feel like there’s going to be some sort of intersection. You’re not quite sure exactly what that is. By doing that in the first episode, it gives you a different level of context for all of the episodes that happen after that. Because they’re not just a dead body; you knew that person.”

And Mare’s journey to find out what happened to that person, who you now know just as well as the detective, is just beginning.